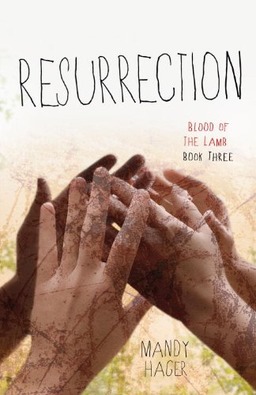 There’s no question that the hottest trend in fiction right now isn’t vampire romances, zombies, or even superheroes. It’s young adult dystopias. The trend didn’t begin with The Hunger Games, but for sure that’s the series that kicked it into high gear. Wander the young adult section of your local bookstores and you’ll see what I mean — you’ll find dozens of volumes advertising a grim future for our young folk. It would be depressing, except for the cheery sound of a cash register ringing.

There’s been such a flood of new dystopian fantasy that it’s made it tough for a quality new series to get noticed. Mandy Hager’s Blood of the Lamb trilogy — beginning with The Crossing (January 2013) and Into the Wilderness (January 2014) — has quietly been accumulating excellent reviews and new readers, and the arrival of the third book next month is sure to launch this one into the spotlight. Pick up the first two books now, while there’s still time.

When Maryam arrives back at Onewēre and tries to loosen the Apostles’ religious stranglehold by sharing the miraculous remedy for Te Matee lai, she finds herself captured once again — prey to the Apostles’ deadly game. The ruling elite manipulate her return by setting in motion a highly orchestrated ritual before a hysterical and brain-washed crowd. Somehow Maryam must get the islanders to listen to her plea that they start thinking for themselves — hoping to stir the independence in their hearts, even as she finds herself on the brink of death.