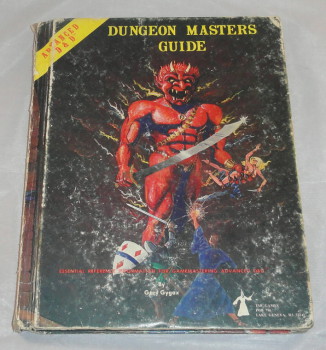 When I was growing up, at the height of the Dungeons & Dragons craze, the county public library system regularly held “game days.” These events, which occurred every few months (probably more often in the summertime), took place in the meeting rooms of various libraries, allowing aficionados of roleplaying games to meet and play together. I found these events truly wonderful, as they introduced me not just to new players, but to new RPGs, some of which I’d only ever seen in advertisements in the pages of Dragon. They were wonderful, too, because I got the chance to play, something I rarely did with my neighborhood group of friends, since I was invariably the referee.

On one occasion, the library opened up its board room, which had a very long table surrounded by a dozen or more high-backed and padded chairs. One of the older referees – a middle-aged bearded guy with glasses – set up shop there and, before long, every single one of those comfy chairs was filled with a player, many of them under the age of 14, like myself. I had great fun playing in that adventure, in no small part because the referee was excellent. He knew the rules of D&D very well, but, more importantly, he knew how to manage such a large gathering of players, holding all of our attentions during the course of three or four hours. Even now, that games day is one of my fondest memories from my early days in the hobby.

I don’t know that referee’s name (assuming I ever knew it), but I do remember a lot about him. One detail that has stuck with me after more than three decades is how beaten up his Advanced D&D Dungeon Masters Guide was. That thing was positively battered, its cover illustration marred by white marks, the spine coming apart at the tops and bottoms, the corners bent, and the whole thing covered in scuffs. At the time, I was positively horrified by what I saw. My AD&D hardcovers were the crown jewels of my growing RPG collection and I tried very hard to keep them pristine. Seeing the poor condition of this referee’s book was shocking.

What had this referee done with his book that it was in such a frightful condition? 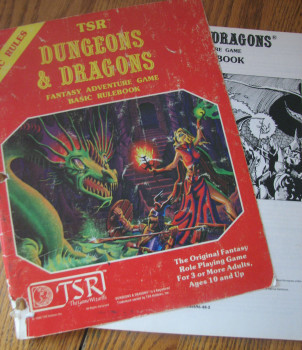 The answer, of course, is that it had been used. In those days, it was commonplace for D&D players to carry their books around with them everywhere, usually in a backpack. No matter how well made the AD&D rulebooks are – and they are extremely well made, probably the sturdiest RPG books ever produced – even they will begin to show signs of wear and tear if they’re thrown into a backpack with a bunch of other books, a dice bag, and who knows what else and then are lugged everywhere you go (because you could never be sure a D&D game wouldn’t break out spontaneously). This was the book of a referee whose DMG had been around the block a few times, not that of a dilettante or collector who kept it on a shelf and never perused its pages, let alone used it at the table.

I’ve got a fairly extensive RPG collection – too large, actually, which is why I’m currently in the midst of paring it down to something more manageable. If you were to look at it with any care, I suspect it’d be pretty easy to tell which books and games I purchased and actually used at the table and which ones I never used. I still have my original AD&D books, resting on the shelf above me as I type this. They’re in good condition, way better than that Dungeon Masters Guide I saw at that games day long ago, but they’re not as immaculate as my younger self would have preferred. They show whitening and have scuff marks and dings on their covers. Their pages have little stains here and there, like the gnat on p. 14, whose blood can still be seen decades after a friend smashed it when the insect dared to alight just above the word “Intelligence” beneath Character Race Table II. Or the dirty fingerprint on the end papers of my Monster Manual, marked there when I foolishly opened the book just after wiping off a picnic table where I’d sat down one summer evening to read it.

When I was a kid, these imperfections used to bother me. I saw them as serious flaws, not just in my books and games, but in myself. I saw them as evidence that I had taken insufficient care of my games, that I hadn’t valued them enough to ensure they were safe from harm. Nowadays, I find such notions strange, if not ridiculous. Don’t get me wrong; I like a well-preserved vintage game book or boxed set as much as the next middle-aged gamer. Gygax knows I’ve spent some effort in attempting to re-acquire a number of RPG products I once owned but foolishly gave away or sold in my 20s when I believed I’d never use them again. But that’s the thing: I intend to use these materials, not put them on a shelf somewhere like a trophy or an idol to my long-lost youth. Games are for playing, which is why I’m now proud of my battle-scarred books rather than ashamed of them. Every wrinkle and dent is proof that I’ve used them as they were intended to be used: as vehicles for imaginary adventures with my friends and family.

I agree with everything you say here, but I’m curious: Do you see anything wrong with acquiring games merely as trophies or as bits of nostalgia?

“Wrong?” That’s probably a more morally loaded word than I’d use. I can only say I am deeply ambivalent about collecting stuff and never using it for its intended purpose, whether it be RPG products or Barbie dolls. I’m completely inconsistent on this point (since I don’t find philately odd, for example), so I can’t really argue rationally against RPG collecting. I’m not even sure I am against it, only that there’s something to it that doesn’t sit well with me.

I’ve never been that much into RPG’s (a little Call of Cthulhu aside) but I’ve been buying hex and counter wargames since the mid 70’s, and I can’t tell you how many (out of the garagefull I have)I’ve never played – or even punched. I decided long ago not to let it bother me, and see it instead as an inducement to immortality; one day I’ll get around to playing all of them…

Should’ve clarified “wrong.” I teach a lot of ethics courses and often use normative terms in ways that are not morally intended.

My question is only whether you thought there was some sort of normative push (at least for you if not for others) to NOT purchase/acquire games EXCEPT FOR the playing of them. I think your response of “doesn’t sit well with me” is an affirmative, at least for you.

> I can only say I am deeply ambivalent about collecting stuff and never using it for its intended purpose,

Well, as an entirely irrational games collector, I can only say that I sometimes justify my desire to collect by pointing out that part of it springs from a very real desire to support the creators and publishers who bring us games (sometimes with a very shaky business model).

I’ve been told by several store owners that if it weren’t for collectors, most book stores and games stores would have closed long ago. I don’t know how much of that I believe, but I am convinced that collectors play a very important role in keeping small publishers alive.

That “wear” is why over the years I’ve purchased at least two, often three or more copies, of some of my favorite old-school gaming products.

SPI and TSR editions of Dragonquest? I’ve got worn conditions of each, as well as near pristine versions (of SPI’s second edition).

Revolt on Antares? Yep, one quite worn version and another that’s never had its pieces punched.

I could go on, but won’t for fear of boring everyone. 🙂

I’ve rebound several AD&D books with demolished covers into single-volume copies (DMG/PHB/US and MM/FF/MM2. I can’t, however, bring myself to break apart copies in decent condition to do so.