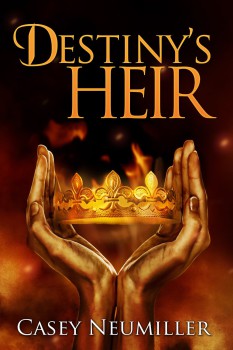 Casey Neumiller’s Destiny’s Heir is the first book of a planned epic fantasy series. Like most novels starting off a series, a goodly portion is spent introducing the characters and the world. For centuries, Letale’s kings have ruled with the guidance of the Magi, who both advise the king and, when necessary, combat the servants of the Dark One. But a few decades ago, a new king assassinated the old line and declared the Magi outlaws, flipping the theology by declaring that the Aethir whom the Magi serve is the Dark One and the former Dark One is the Light One. It seems odd how easily most people accept this, but there are enough real world examples of a paradigm shift in belief systems that I don’t consider it too unbelievable.

The story follows two parallel plot lines, that of the Magi apprentice Arraya and that of the thief Ben, alternating between them for each chapter. From Ben’s point of view, this is a heist story. He and his friends, Zeke and Corin, have been asked by the leader of their guild in Jepitsa to assist in stealing one of the most valuable items in the kingdom, the queen’s crown. There is no actual queen, so the crown’s kept in storage, where it can be easily claimed by a clever thief with the right items, which Ben, Zeke, and Corin spend most of the novel attaining.

Corin, however, has some doubts about the guild-leader Allen. She thinks he means to make off with the crown while leaving the rest of them to take the blame, doubts which Ben is unable to put to rest.

While Ben is planning to get rich, Arraya’s master Shallum has had a vision of a true heir to the throne, one which the Imposter-King has missed. He plans to travel to Jepitsa and retrieve the heir, so the Magi can throw their support behind him. But he forbids Arraya from joining him, requiring her to stay with the other Magi in hiding. She reluctantly concedes, but soon after has a vision of Shallum being killed by magic. The Magi Council sends her to retrieve Shallum before the servants of the Dark One can kill him. Unfortunately, before she can find her master, she is captured by lizard-like Tillik bandits. She manages to escape with the help of one young Tillik named J’Ram and a fellow prisoner Naomi, who happens to be an Erixan shootist, one of a handful of firearm users in this world. The three of them soon head to Jepitsa, J’Ram out of a sense of obligation to Arraya, Naomi for her own reasons.The characters are strong and interesting, especially Arraya and Corin. Ben sometimes pales beside Corin, despite having the point of view for his chapters. She’s cleverer and more resourceful than he is, and manages to pull a few wins out of Ben’s fumbles. What Ben does have is a nobility of character and a willingness for self-sacrifice. That makes him a good person, but not always as interesting as a character. Arraya’s chapters were often more fun to read, not least because she and her traveling companions have more varied skills and abilities, and wildly different outlooks. Arraya is a dutiful apprentice Magi, determined to perform the task ahead of her. J’Ram has his own sense of duty, but sees everything in terms of a hunt where he must follow through. And Naomi is an assassin, probably. No one’s ever really sure what she’s after in Jepitsa. There’s a bit more tension among those three, which makes for interesting interactions, though that ultimately felt underexplored.

The prose shows some signs of inexperience. Occasionally, the author over-explains things, telling us what a character says, and then explaining why the character said it, for example. This sort of explanation is rarely needed when sufficient context is given. Other times, the author was too wordy or added needless variation to appellations and dialogue tags. None of it was too egregious and I had no trouble overlooking it for the sake of the story, but it was indicative that the author is still developing his craft.

The plot moves along at a decent pace and holds together well, but without any real surprises. The big twist at the end was too heavily foreshadowed to be unexpected. The only real surprise was a little bit too close to a deus ex machine that still hasn’t been explained. Despite that, the ending was satisfying. You had a sense that something had been accomplished, that the right people were vindicated, and events had been set on their proper course, right in time for the sequel. It’s a decent setup for the first novel in a series and I hope that it leads to bigger and better things in the near future.