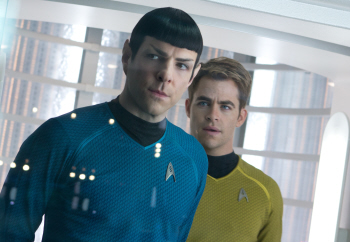 Paramount Pictures confirmed on Wednesday that the third film in the J.J. Abrams-helmed Star Trek reboot has been green-lit for a 2016 release.

I haven’t been the biggest fan of the new films. Sure, they are highly watchable blockbuster action pics — fast moving, splendidly acted, and with terrific effects. But to me they haven’t captured the spirit of the original show and the creators seem kinda oblivious to this fact, turning characters I’ve loved for 40 years into action-film superheroes, with Spock getting into prolonged fistfights with superhuman opponents and Kirk ascending confidently into the Captain’s chair of the Enterprise in his early 20s, less than 24 hours out of the academy. It’s been more like watching The Expendables filmed on a Star Trek set (which actually sounds sorta cool, now that I say it out loud.)

But that’s okay. The films have been popular and have kept the franchise in the public eye. And they’re by no means bad films — they’re just not the Star Trek I wanted. So I was pleased to hear that there would be a third. Especially since the ending of Star Trek Into Darkness strongly implied the next one would be closer in spirit to the original version, with the crew finally beginning their five-year mission of exploration.

We don’t know a lot about the new movie yet. We know it will be directed by Roberto Orci, screenwriter and producer of Star Trek Into Darkness, The Amazing Spider-Man 2, and the Sleepy Hollow TV show, in his directorial debut. In a recent interview, Orci stated that he wants the film to be more original, and to stay in the classic Trek world, which at least sounds good. His co-writer J.D. Payne also dropped a few clues about the plot.

Star Trek 3 (no idea if that’s the final title) will be written by Patrick McKay, Roberto Orci, and John D. Payne, and produced by J.J. Abrams and David Ellison. It is scheduled for a 2016 release, just in time for the show’s 50th anniversary. (Thanks to Tor.com for the tip.)

I feel the same way about these films, and I think that the enormous money/merchandising/publicity/dealmaking machine that is modern franchise moviemaking means that there’s zero chance that we’ll ever get any semblance of the “real” Star Trek on the big screen. But so what? I’ve just watched the new Star Trek Continues episode, “The Fairest of Them All,” and like the first two episodes, it’s a home run. STC IS Star Trek – the original characters, effects, sensibility are all right there to be enjoyed as if it were still 1967. Let Abrams and his crew do what they will – the real Star Trek is in good hands.

The first film had the baddie go back in time to change the course of Kirk’s life; a useful way of reintroducing the characters while also letting your audience know that their lives would now be following a totally different path, thereby enabling you to tell new stories about them.* The idea of altering the course of history via time-travel is pretty unoriginal in SF terms, but at least it was something. Unfortunately the second film revealed this was to be the franchise’s one concession to the spirit of the original series (which had a great trio of characters PLUS genuine intellectual curiosity). What was the big idea/concept behind the second film? Was there one? It seemed almost exclusively character driven to me.

*Abrams could have done something really interesting with this: making Spock captain and Kirk his hot-headed second-in-command, for example (the original premise behind STNG) – the first film even flirted, albeit briefly, with this idea.

I debated saying something similar in my post, and I’m glad I didn’t. You said it better. 🙂

I just hope the chemistry works for this new group,and the franchise continues where no one has gone before.

> What was the big idea/concept behind the second film? Was there one? It seemed almost exclusively character driven to me.

Great question. I think the surprise at the core of STAR TREK INTO DARKNESS was intended to be (*Spolier alert*) the fact that it was Kirk who scarified himself to save his ship, not Spock, inverting the events in the original STAR TREK II: WRATH OF KHAN. Which worked fine, really — certainly both Kirk and Spock had fine story arcs in the movie, and that tied them up nicely — but I agree completely that it ended up feeling less like a great STAR TREK episode and much more like a dumb SF action flick.

Gene Rodenberry had the courage and wisdom to actually let the future be a positive world, unlike those after his death who introduced poverty, generally accepted corruption and general icky-ness. I hope the original positive view is allowed to manifest without the “need” for drek in the name of “reality”.

For STAR TREK 3, or even 4, I’d love to see a blending of “City On The Edge Of Forever” with “Mirror, Mirror.” Kirk, Uhura, and Scott could be on hand at the Guardian to search for Dr. Mccoy, but as soon as he escapes into the past, our next shot of those three reveals that they are from the Mirror universe! Suddenly regaining a missing doctor doesn’t seem that important to them, so they abandon him and return to ENTERPRISE–to an evil Sulu, a conniving Chekov, and a bearded Mr. Spock!. However, as time passes, the landing party begins to feel appalled at what they see from the Mirror Federation,sensing that something isn’t right. This results in talk, speculation about their proximity to the Guardian when the Dr. went through, yadda-yadda-yadda…. They decide to return to the Guardian to go through and find McCoy, and undo whatever he did to change history (save Edith Keeler’s life). The mirror Spock insists on accompanying them, and is cold enough to make sure that Edith dies to set matters straight.

It’d be great. And, most importantly we could have Chris Pine’s leading lady from JACK RYAN–KEIRA KNIGHTLEY–as “Edith Keeler”!

That’s very interesting, John – I only have very dim memories of ‘The Wrath of the Khan’ and didn’t realise that the second movie is a riff on the original, albeit with the characters making different decisions. Whether it makes ‘Into Darkness’ a better movie is debateable, but it does provide an insight into the extent of Abrams’ involvement. One of the big themes of ‘Lost’ (if I understood it correctly) was that the characters were actually just versions of their original selves, their lives having different outcomes thanks to the original (evil) Locke’s attempt to alter their time-line – ie, they had to make different decisions as a result. Exploring the same themes in the ‘Star Trek’ franchise suggests a certain consistency, if nothing else.

It was Lost that induced me to give Abrams a dishonorable discharge for the high crime of audience-buggering. He permanently lost my trust after that show.