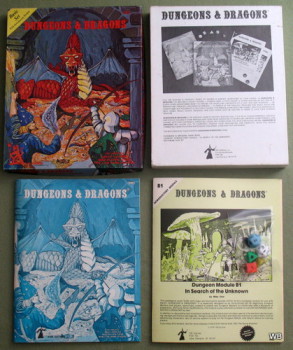 I’ve mentioned before – probably too often – that the first copy of Dungeons & Dragons I ever owned was the 1977 Basic Set edited by J. Eric Holmes, featuring a cover illustration by the late, great David C. Sutherland III. The contents of that boxed set are pictured to the right, though the particular version I owned did not come with the dice shown there, but rather laminated cardboard chits. I had to purchase those dice separately through a local toy store.

I loved that Basic Set to bits – literally. I carried it with me everywhere: to school, to the library, to my grandparents’ place, but most often to my friends’ homes, where we’d gather round a table to play this incredible new game we discovered over Christmas break. Consequently, the box eventually fell apart, just as the rulebook and adventure module started losing pages. Before too long, all that remained were the chits, which I still own to this day. I still own the dice, too, but they’re so battered and beaten that the twenty-sider is barely recognizable, never mind usable.

I think about that Basic Set often, because it was my introduction to a hobby I still enjoy to this day, but I found myself thinking about it this past Sunday – Father’s Day – for another reason. By the time I first encountered D&D in 1979, it was well on its way to becoming a genuine fad, helped in no small part by the notoriety it achieved due to its supposed connection to the disappearance of a Michigan State University student earlier that year. The Basic Set I first owned was originally purchased for my father. My mother bought it in the belief that he’d want to see what this game was all about, since he’d been reading all the newspaper and magazine articles he could find about the Michigan State disappearance.

As it turned out, Dad had no interest in learning to play Dungeons & Dragons whatsoever, which is why he readily turned it over to me when I expressed an interest in learning more. It’s for that reason that I’ve always considered him to be the person who first introduced me to roleplaying, even though he was not (and never would be) a roleplayer himself. 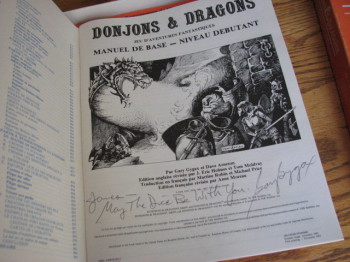 Like a great many fathers and sons, Dad and I didn’t always see eye to eye. And, like a great many sons, I was convinced he never really understood me or made much of an effort to do so. I’m not sure I was wrong in believing this, but, given our very different personalities and outlooks on life, I can’t really blame him (though I did for a long, long time). Despite that, my father often played key roles in my deeper initiation into the hobby of roleplaying. For example, when I entered high school, I studied French and Latin. I once offhandedly mentioned that TSR Hobbies, the publisher of D&D, had produced a French translation of the game and that I wished it was available for sale in the US, so I could use it to help learn the language. A few days later, I came home and my father handed me the phone, telling me, without further explanation, that he had “that game company on the phone.”

“That game company” was TSR, whose number my father had found (via directory assistance, I suppose) and simply called out of the blue, asking for information about the French translation. He was apparently shuffled around from office to office until finally he was put in touch with François Marcela-Froideval, a French game designer whom Gary Gygax had brought over to Wisconsin to serve as his assistant and as a consultant in TSR’s efforts to expand into Europe. It was with M. Marcela-Froideval that I would speak when Dad handed me the phone. We had a pleasant conversation in which he asked me about both my D&D campaign and my studies. He also promised to send along my well wishes to Gary Gygax, whom my 14 year-old self idolized. A few days later, I received a copy of the French Basic Set and several modules. The title page of the Manuel de Base contained a special surprise, as you can see from the photo to the left.

That’s the way Dad was. I rarely had a conversation with him about any “important” topic – or indeed any topic – that didn’t end in an argument, but he’d go out of his way to get in contact with an intimate of Gary Gygax just so I could have a copy of the French translation of Dungeons & Dragons. A few years later, as I neared the end of my high school days, my father came across “really old copies of D&D stuff” (his words) that some hobby store was selling off cheaply. He asked if I wanted them and I said yes, not knowing exactly what this “old stuff” actually was. When he brought it home, I saw it was a copy of the Original Collector’s Edition of 1974 D&D, several of its supplements, and a pristine copy of the 1977 Basic Set I’d worn out nearly a decade beforehand. Unlike its predecessor, I still have that second copy sitting on a shelf to this day.

I wish I could say that Dad and I eventually saw eye to eye or that I ever got over the sense that he didn’t understand me. But, thinking back on this past Father’s Day, I remembered a very important way that he contributed to making me the person I am today. At several points in my adolescence, he encouraged my interest in roleplaying games, giving me a hobby that has endured for more than three decades. It’s unfortunately long past the point where I can say this to him, but it’s worth saying nonetheless: Thanks, Dad.