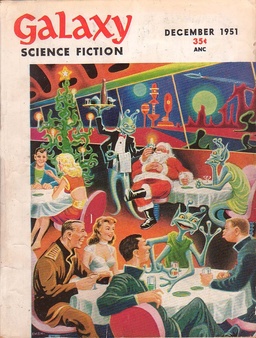 Galaxy’s December issue hit newsstands with a holiday cover: Santa Claus smoking a pipe on an alien world in a restaurant patronized by humans and aliens. This was a very strong issue and I loved it.

There are other Galaxy stories I would place above those in this issue, such as Bradbury’s “The Fireman” or anything by Poul Anderson, but the contents of December 1951 are amazing. I couldn’t even pick a favorite story. Authors include Damon Knight, Fritz Leiber, and Jack Vance, so that might be part of the reason for its greatness.

“World Without Children” by Damon Knight — George is the last recorded birth for humanity, and even though that was 200 years ago, people still refer to him as The Child. The birth prohibition is firmly in place to prevent overpopulation — a reasonable precaution since scientists have figured out a way to extend a human lifespan by fifty times.

But even if it were repealed, very few of the populace would have the ability to procreate. George is part of a small group of individuals who realize that the trade-off for longevity was sterility, and since they cannot convince the government to take action, they plan to start an underground birthing organization.

The story seemed to start out a bit slow, but it soon moved into a cloak-and-dagger, resist-the-all-powerful-government thriller. I’m not sure if I liked the ending, though. It seemed too upbeat after everything else that took place.

“A Pail of Air” by Fritz Leiber — The earth has been ripped free from its orbit around the sun by the gravitational pull of a dark star. One family works together to survive in the frozen world. 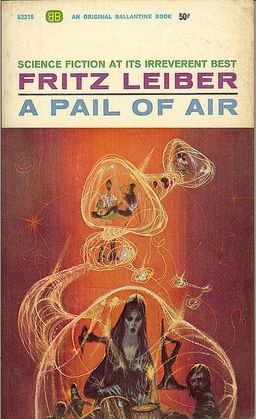 I was really uncertain around the physics of this story, but I put my reservations on hold so that I could enjoy what was there. Even with aspects that seemed implausible, Leiber has a way of guiding readers through it anyway, and the story works overall.

“With These Hands” by C. M. Kornbluth — Roald Halvorsen is a man of the past — a sculptor whose works can be made by machine. Anything machine-built lacks certain character and the precision of a true artist, but for most people, it’s good enough.

Halvorsen’s dwindling income is mostly from teaching art… but one of his newest students may help him find new patrons, provided he doesn’t make the mistake of getting into a relationship with her.

I loved this piece. I think it’s timeless. You can feel the details around the artist and his work and really connect with the protagonist.

“Winner Lose All” by Jack Vance — Human explorers discover a new world and investigate it as a possible habitat. Meanwhile, an intelligent organism known as the unigen makes the same discovery, though its purpose is to feed on the radioactive matter within the world.

By chance, the two species meet, but neither senses any danger in the other. Both are wrong.

This was another brilliant story within the issue. I loved the description around the unigen — how utterly alien it truly was. And the planet itself is more than a setting; it’s almost a background character.

“Not a Creature Was Stirring” by Dean Evans — Gannett leaves the depths of his goldmine to rejoin society for a brief period. Except there is no society anymore. All he encounters are dead people — their bodies still sitting or standing in whatever were their last moments — victims of a mysterious gas weapon.

There are plenty of last-man-on-earth stories. But this one felt very real.  If it’s been a while since you’ve read a story of that sub-genre, I recommend picking this one up.

“Pillar to Post” by John Wyndham — Terry Molton is an amputee struggling to get through a painful life. He turns to medication to ease his suffering and during one of his highs, he finds himself transported into the future.

He trades places with a physically fit man, someone with a scientific mind who has been experimenting with trading minds with people of the past. But when the scientist wants to trade back bodies, Terry puts up a fight, leading to a battle of wits to determine who will remain in Terry’s body and who will remain in the future.

I wasn’t captivated so much by Terry’s trip into the future, but I loved the part when the future man is trying to trade bodies back. Without spoiling too much, the way the future man trades back is by creating a cruder model of the invention he has in the future, so the trick is to use the device (in order to get the future body) and then set up a way for the device to be destroyed (so that whoever is in the past is trapped in the past). Or whatever options one might think of to outwit the other.

The two characters go back and forth, each trying to trick the other into becoming trapped in the amputee’s body. I think that part of the story plays out really well. Also, the ending was unexpected, though perhaps a bit foreshadowed by the prologue.

Matthew Wuertz’s last retro review for us was the November 1951 issue of Galaxy Science Fiction.

So I was all set to throw in my thoughts on this issue when an annoying virus made any kind of input impossible. I think I have that under control now, so we’ll see how it goes…

“World Without Children,” in my opinion, starts slowly and never picks up much momentum. I think the story might have had more of an impact if about twenty pages were trimmed off. There is, however, some thoughtful material here. Everyone wants to believe in immortality of some sort, either through some medical breakthrough that permanently extends earthly life, or confirmation of some religious belief that promises an eternal afterlife. The consequence of permanent (or extended) life is, of course, overpopulation. The group of rebels and their mysterious female assistant is interesting to follow, and Damon Knight does a great job integrating the classic themes of immortality, overpopulation, and tyranny, and setting forth intelligent discussions about how they might intertwine. Just a bit too long for my taste.

“A Pail of Air” pulled me right in. The atmospheric writing (not a pun) and use of narrator voice helped me to see and feel their situation and their desperate love for each other. Yes, the science was a bit iffy, but I don’t mind suspending judgement either when it is a good story.

Matthew, you mentioned the upbeat ending in “World Without Children.” The ending of “A Pail of Air” struck me the same way. I was happy for poor family and their new opportunities, but the uplifting ending almost seemed to spoil the tone of the rest of the story.

Stories like “With These Hands” always resonate with me. How much can human-created art be replaced by mechanism and duplication?

“‘I’ll be my own audience,’ he thought. ‘God knows I learned there isn’t any other, not any more.'” The angst of the artist as he slowly becomes obsolete is apparent throughout the story. Great stuff.

My field is music, and I am watching machines replace every musical instrument, including the human voice, and wondering how future generations will look back on the music of this era. I see no positive legacy from the music that is being produced now, and I am confident that human produced art will ultimately by recognized as far superior to machines and duplicates.

Jack Vance is always entertaining and brilliant. His Cudgel the Clever stories from F&SF were some of the most descriptive and dark narratives I have read. “Winner Lose All” is an unique premise of a battle that neither side really understands and is only peripherally aware. This was probably my favorite story in this issue.

“Not a Creature Was Stirring” was an easy and entertaining story. Instead of the bank vault in the Twilight Zone, our hero survives the global devastation by sleeping in his gold mine. His journey and slow discovery (and persistent denial) of the catastrophe are strangely fun and enjoyable. The ending finally does justice to the Christmas reference in the title, but I am not sure I would call it a classic, uplifting closing.

Finally, “Pillar to Post” gave a new twist to classic time travel themes, as well as the moral challenges of immortality. In this case, you live forever by stealing the bodies of those who, in society’s judgement, don’t need them. Yikes. It was nice to see some development of a female character, rather than the typical 1950s style of describing her body over and over again. I enjoyed the battle of wits and ingenuity towards the end, and I didn’t mind the ending and the use of another, apparently, undeserved body to resole things. I did enjoy the visit to the future and the discussion about how such a cannibalistic society functions.

My virus appears to be under control for the moment, so all is well. My worst problem now is my March 1952 issue of Imagination, which is so water-damaged that I cannot open it without tearing it apart. Back to ebay.

I finally got the Firemen issue of Galaxy, so I can start from the beginning now and catch up to where I joined you, Matthew. I finished the first issue and should be caught up by the end of summer.

I am excited to read “The Demolished Man” for the first time. See you next month.

I don’t think I would have liked “A Pail of Air” as much if it ended without the happy ending. It confirmed they had a reason for hope.

I’m not sure there was much of a diversity in the female character of “Pillar to Post”. It seemed like: let’s take our stereotypical female and make her intelligent. (Groan.) But I find that with a lot of these stories, the characters (both male and female) are mostly flat. I think the plot is the aspect that drives the story. Don’t get me wrong, though; I do enjoy a lot of these stories anyway.

I’m wondering if the movement toward richer characters in today’s fiction is due to a limit in science-fiction “what if” scenarios. To write a stand-out story, the science alone (or questioning society’s reaction to the science) isn’t enough to get it done.