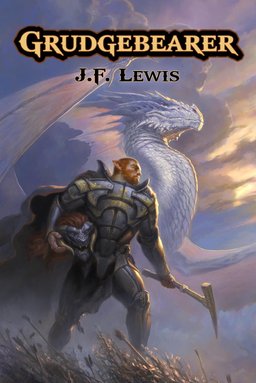 J.F. Lewis is the author of the Void City novels, about a vampire who runs a strip club and suffers from short-term memory problems.

With Grudgebearer, the first volume of the Grudgebearer trilogy, Lewis turns to more classic second-world fantasy with a setting full of action, adventure, and carnivorous elves…

Kholster is the first born of the practically immortal Aern, a race created by the Eldrennai as warrior-slaves to defend them from the magic-resistant reptilian Zaur. Unable to break an oath without breaking their connection with each other, the Aern served the Eldrennai faithfully for thousands of years until the Sundering. Now, the Aern, Vael, and Eldrennai meet every hundred years for a Grand Conjunction to renew their tenuous peace.

While the tortures of slavery remain fresh in Kholster’s mind, most of the rest of the world has moved on. Almost six hundred years after the Sundering, an Eldrennai prince carelessly breaks the truce by setting up a surprise museum exhibit containing sentient suits of Aernese armor left behind, never to be touched, lest Kholster kill every last Eldrennai. Through their still-existing connection with their ancient armor, the Aern know instantly, and Kholster must find a way to keep his oaths, even those made in haste and anger. While Kholster travels to the Grand Conjunction with his Freeborn daughter and chosen successor Rae’en, his troops travel by sea, heading for war.

Grudgebearer will be published on September 2 by Pyr Books. It is 400 pages, priced at $18 in trade paperback and $11.99 for the digital edition.

See all of our recent articles on upcoming books here.