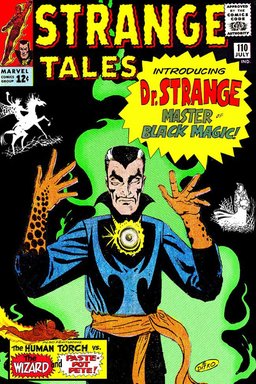 The property has enormous potential to be something completely original in the superhero genre — namely a faithful rendition of Steve Ditko’s playful (and totally bonkers) inter-dimensional setting, which is what first blew away so many readers of Doctor Strange in the 1960s. A hero whose adventures routinely took him to gorgeous, bizarre, imaginative, and frequently monster-filled realms where normal concepts of space and distance were useless was something totally new, and readers thrilled to it — and it took Ditko’s unique genius to really make it work.

However, Marvel Studios took a huge step forward this week, announcing that they had selected a director for the film: Scott Derrickson, writer/director of the terrific little horror film Sinister, perhaps the best horror flick of 2012. Derrickson has an impressive resume as a writer/director, including The Exorcism of Emily Rose (2005) and the upcoming Deliver Us from Evil (July 2014). He was also the director of the 2008 remake of The Day the Earth Stood Still.

If you’re getting a strong horror vibe off  Derrickson’s resume, you’re not alone. Matt D. Wilson at Comics Alliance did a fine job of articulating my own feelings on the announcement yesterday:

Seriously, though, that’s pretty interesting, considering that Doctor Strange has never been what I’d call a horror character, despite his many dealings with supernatural forces, demons, dark magic, and so forth. But his stories have always tended to be more fantastical, while other Marvel characters, such as Son of Satan, Werewolf By Night, and, you know, Dracula, have tended to be more horror-focused. The decision perhaps suggests a tone that won’t necessarily please Doctor Strange fans, but may be very palatable to general movie audiences, who made the low-budget Sinister a surprise hit back in 2012.

In short, I wasn’t expecting a horror film with Doctor Strange, but given the dark nature of the source material, if that’s the direction they’ve chosen, I’m on board. Especially given how effective Sinister was… seriously, if you haven’t seen that film, track it down. I still get shivers.

And for those of you who still don’t understand or appreciate the unique magic of Steve Ditko, here’s another taste of what the man brought to comics in the 1960s. Just because. 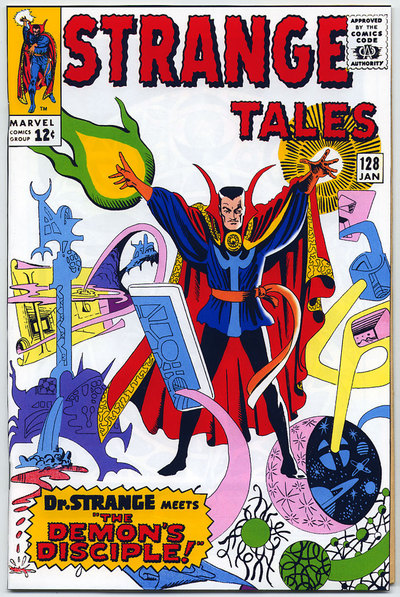 [Taken from an original Ditko pin-up in issue #128, and used as the cover of the comic shipped with the Marvel Legends Doctor Strange action figure. See The Doctor Strange Custom Covers Project for more details. Click for bigger version.]

While we’re on the topic of Doctor Strange — and if Marvel Studios can capture the Ditko magic — there’s an amusing article by Rob Bricken at io9 today that addresses a related topic: “Are Dr. Strange And Magic Too Weird For The Marvel Cinematic Universe?”

Will it work? Can Marvel add magic without it seeming too silly? I say yes, mostly because they managed to add Thor and all his Norse myth-ness without it seeming ridiculous. If I had to guess, I’d say adding the Scarlet Witch to Avengers: Age of Ultron was another step in setting up the addition of magic to the Marvel cinematic universe (they obviously can’t call her a mutant). I think by the time Dr. Strange comes out, audiences will be primed to accept this new realm, giving Marvel a lot of leeway in terms of potential silliness.

And really, it’s going to be the actor/character of Dr. Strange that sells it. If they get the right guy, he can yell “By the Eye of Agamotto!” and have it not sound terrible…

Some of those early Strange Tales stories felt like horror to me, sort of from an EC-Comics-lite perspective, especially that first story in Strange Tales 110. And “The House of Shadows” in 120.

Either way, I’m happy with the direction all this seems to be taking.

You know, that’s a really good point. Doctor Strange started out as an EC-comics-like weird/horror, before it gradually became a superhero comic.

Wonder if they’ll be able to capture any of that vibe in the film?

[…] and especially the way he portrayed the dimension-hopping adventures of his sorcerer-hero. Marvel announced the director would be Scott Derrickson (who directed the fabulously creepy Sinister, and Deliver […]