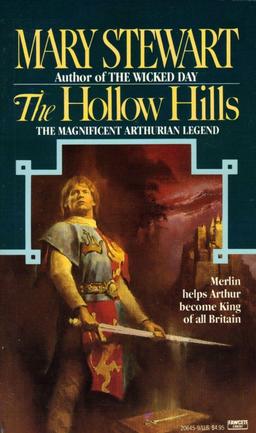 I’ve read only a handful of Stewart’s novels. Her Merlin Trilogy — The Crystal Cave (1970), The Hollow Hills (1973), and The Last Enchantment (1979) — is one of the top-selling Arthurian sagas of all time, hitting bestseller lists around the world. It was her only fantasy series, but it instantly made her one of the most popular fantasy authors of the 70s.

But I got used to seeing the covers of her romantic mystery novels. My wife re-read them constantly. Alice is a voracious reader and she’s read widely in both mystery and contemporary fiction, but at least once a year she pulls out one of her tattered Mary Stewart paperbacks.

“Why are you constantly re-reading those, when you have so many others to choose from?” I asked her once, shortly after we were married.

“Because these are the best,” she said simply.

Mary Stewart lived in Edinburgh, Scotland. She died on May 10th at the age of 97.

John,
Thanks for posting this. I hadn’t heard about her death and she was one of my favorite authors. I read everything she wrote. Most of the many many times. The first three books of the Merlin series I thought were the best. She wrote later that she made a mistake giving Modred an aura of evil because all her research showed it was not so.
My other favorite books of hers were “This Rough Magic” and two that you did not name: “The Airs Above Ground” and especially “The Ivy Tree.” In the latter book I learned how to say something right up front–give a valuable clue–and then hide it in context. What a writer. Her books at first were fairly simple but became more complex as she continued to write. She was literate and for her day, very original. For her Merlin series she did years of research. He was more of an engineer who studied ancient secrets and listened to wise old men than a magician.
She will be missed. She hasn’t written much new in a long time but there was always the hope she would. Thanks again for posting this. My condolences to your wife. She will understand what I mean when you tell her that.
Barbara