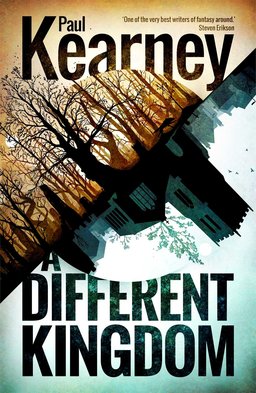 Paul Kearney’s first three novels, The Way to Babylon (1992), A Different Kingdom (1993) and Riding the Unicorn (1994), all appeared in the UK, but were never reprinted here in the US. That is, until both his five-volume Solaris series The Monarchies of God and The Macht trilogy (included in Locus Online’s Best Heroic Fantasy of 2010 list) became a success here.

Now Solaris is bringing his early novels into print in the US for the first time, starting with A Different Kingdom, which Interzone magazine called “An utterly splendid piece.”

Michael Fay is a normal boy, living with his grandparents on their family farm in rural Ireland. In the woods — once thought safe and well-explored — there are wolves; and other things, dangerous things. He doesn’t tell his family, not even his Aunt Rose, his closest friend. And then, as Michael wanders through the trees, he finds himself in the Other Place. There are strange people, and monsters, and a girl called Cat.

When the wolves follow him from the Other Place to his family’s doorstep, Michael must choose between locking the doors and looking away; or following Cat on an adventure that may take an entire lifetime in the Other Place. He will become a man, and a warrior, and confront the Devil himself: the terrible Dark Horseman…

Kearney’s first novel, The Way to Babylon, is scheduled to appear in paperback from Solaris later this month.

I remember reading Kearney’s first three books sometime in the mid 90s after I’d picked them up second hand and was immediately impressed by them. I recall Riding the Unicorn being the darkest of the three and well worth reading. Though all have something interesting to say.

His Monarchies of God series features some of his best writing, weaving our history in a fantasy setting that is evocative and exhilirating. I tend to think the last book is rushed in some parts, but overall the development across the books make this series a standout.

The real shame is that Kearney doesn’t have the profile he absolutely deserves. He seems to have slipped into the gap between latterday Gemmell and the current crop of grim ‘n gritty fantasy writers like Joe Abercrombie, and been overlooked as a consequence. I wonder how this happened, not only to him, but to other writers in that period as dedicated and talented?

For those who haven’t picked up his books, I’d recommend diving straight into his work – it’s varied and entertaining enough for a wide audience.

Thanks for the mini-review! I’m not quite sure how Paul Kearney ended up so overlooked either. Perhaps these new volumes will help.

Patrick Rothfuss, Subterranean, Blood and Obsidian, and a bunch more I’ve bought and found them good reads. Robert gave it a good review and John is aces in my book.