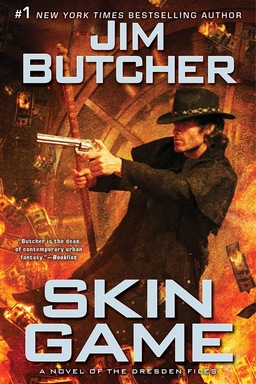 Jim Butcher is something of an inspiration to modern fantasy writers.

Harry Dresden was not a hit when he first appeared, way back in the paperback original Storm Front (2000). Roc sent me a copy and I remember I couldn’t find anyone interested in reviewing it. Ditto with the next few, Fool Moon (2001) and Grave Peril (2001). Thomas Cunningham was the first to start reviewing them for us and he quickly became an unabashed fan.

Things happened fast after that. All my review copies were snapped up (except for my first edition of Summer Knight, which accidently ended up in a dollar bin at my booth at the 2010 World Fantasy Convention, where it was found by a lucky fan). I bought a complete set of the hardcover omnibus editions from the Science Fiction Book Club — and they were loaned out and never returned. I bought a second copy and it suffered the same fate.

Jim Butcher began to hit bestseller lists. I clearly remember the moment when I realized he’d crossed over to literary megastardom — it was at Dragon*Con 2010, when I glimpsed the size of the mob that showed up to get his autograph. The line wound around the room, out the door, and down several blocks.

Jim Butcher is proof positive that it’s still possible to achieve bestseller status starting with a midlist paperback series. That’s the dream of virtually every midlist fantasy writer, and for the greater part of the last decade, as publishing suffered one upheaval after another — the rise of Amazon, the collapse of Borders, and the shift to e-books, just to name a few — it was beginning to look like that dream may have suffered a hard death.

So there’s a lot of reasons to celebrate Jim Butcher’s success. But for most of us, it’s enough to know that the fifteenth volume of one of the most popular fantasy series on the market has finally arrived, breaking an 18-month drought since the last volume, Cold Days (November 2012).

Harry Dresden, Chicago’s only professional wizard, is about to have a very bad day…

Because as Winter Knight to the Queen of Air and Darkness, Harry never knows what the scheming Mab might want him to do. Usually, it’s something awful.

He doesn’t know the half of it…

It’s a smash and grab job to recover the literal Holy Grail from the vaults of the greatest treasure hoard in the supernatural world — which belongs to the one and only Hades, Lord of the freaking Underworld and generally unpleasant character. Worse, Dresden suspects that there is another game afoot that no one is talking about. And he’s dead certain that Nicodemus has no intention of allowing any of his crew to survive the experience. Especially Harry.

Dresden’s always been tricky, but he’s going to have to up his backstabbing game to survive this mess — assuming his own allies don’t end up killing him before his enemies get the chance…