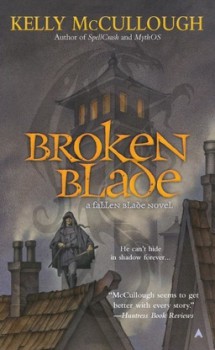 Aral Kingslayer used to be a legend. In another life, he wasa  hired blade for Namera, the goddess of divine justice, and while in that role earned his name. Now that his goddess is dead, his order disbanded, and his compatriots killed, he is a man without a purpose.

Well, unless taking odd jobs to keep his bar tab paid and dodging barbs from his shadow familiar Triss could be called having a purpose. That is, until a lady dressed in red walks into his life with a job offer: deliver a sealed message to a person waiting on a particular balcony at a specified time.

Aral believes this to be an easy job for a man with his unique skill set, and so he accepts. It’s not until he’s almost killed by a man whom he’d thought long dead that he discovers the job is much more than it seems.

Broken Blade is an enjoyable read, even as it doesn’t break any new ground. Assassin novels generally feature a man (check), who has gone rogue for reasonable and/or forgivable reasons (check), who comes to question everything he has known to be true (check). They also feature political intrigue, creative battle/death scenes, and a love interest (check, check, check).

However, one can’t just dump the elements onto the page and expect to get a coherent, entertaining story. An author needs to add a little from each trope and combine them until they make something new, and here McCullough succeeds — he mixes just the right amounts of just the right ingredients to produce a solid novel.

The pacing is fast and effortless. His characters fill the pages with witty repartee and do their part to bring the story to life. The political intrigue was complex enough to keep me guessing and turning the pages. The world building is robust and the magic system obeys its own internal logic.

Most importantly, Aral changes from the man in the title — broken blade — to one who has come to terms with the world around him. I look forward to discovering where Aral’s journey goes next.

I sometimes categorize books by how I picture myself reading them. This is a quick read, and as such, I’d call it more of a “summer in the backyard with a cold bottle of cider” sort of book rather than a “curl up by the fireplace with a glass of wine” kind. The former I want to read for pure entertainment; the latter I want to read because it makes me forget I live in Chicago during the winter.

Based on this book, the entire series belongs squarely in my “sit in the sun and read” to-be-read pile. One can never have too many of those.