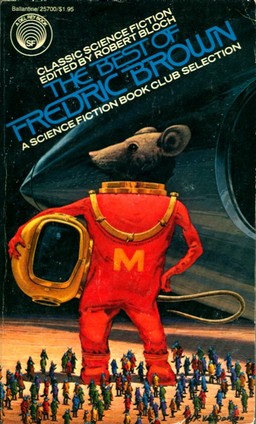 The top article on the Black Gate blog last month was the 13th installment in our ongoing examination of Lester Del Rey’s Classics of Science Fiction line, a look at the 1977 paperback The Best of Fredric Brown. (Brown also showed up a little further down the list, in our take on the Brown and Weinbaum chapters of the Appendix N: Advanced Readings in D&D series over at Tor.com).

Second on the list was Alex Bledsoe’s appreciation of one of my favorite films of the summer, Pacific Rim, and his thoughts on where it fit on the sliding scale between rip-off and homage.

Third was our review of a surprisingly effective, 81-year-old pulp tale by Clark Ashton Smith, “The Vaults of Yoh Vombis.” Fourth was M Harold Page’s report on his trip to the Gemmell Award ceremonies at the World Fantasy Convention. Rounding out the Top Five was Keith West’s opening chapter in his ambitious attempt to review the Ballantine Adult Fantasy Series.

The complete Top 50 Black Gate posts in November were:

The Top 5o Black Gate blog posts in October are here, and you can see all 94 posts we made in the month of November here.

Really cool to see Fredric Brown up top there. Unexpected, too.
Do you suppose it was your unfettered admiration for the guy’s work? (“The Best of Fredric Brown is one of the best short story collections I’ve read in years.”)
Or is Brown perhaps less ‘forgotten’ than many might think?
Either way, it’s nice to see.

Good question. Certainly Fredric Brown deserves most of the credit. Also, there’s been a cumulative effect with these BEST OF articles… they’ve been creeping up the traffic charts, and each one is getting successively more popular.

Next one coming up is C.L. Moore, and I’ve really been enjoying my re-read of her best work. Looking forward to putting my thoughts down!