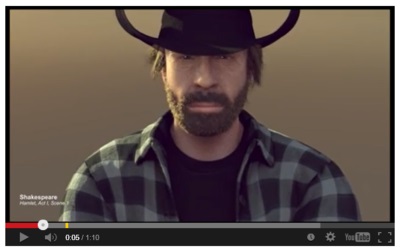 Thirty years later, most film stars of the era have largely retired. Except for occasional appearances in The Expendables franchise — and, if you’re Jean-Claude Van Damme, a history-making advertisement for Volvo.

The action stars of the 80s may be older, but they’re no less competitive… as Delov Digital makes clear in a hilarious remake of Van Damme’s Volvo ad, starring the untoppable Chuck Norris.

In other news for 80s action fans, the teaser trailer for The Expendables 3 — with an expanded cast that includes Harrison Ford, Wesley Snipes, Mel Gibson, Sylvester Stallone, Jason Statham, and Arnold Schwarzenegger — was released yesterday. Enjoy.