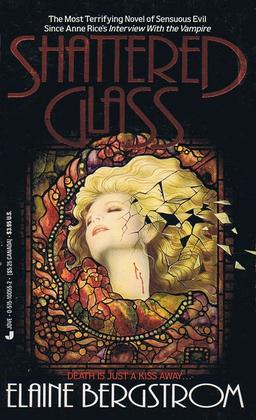 For a long time, I credited the rise of the paranormal fantasy genre pretty much single-handedly to Buffy the Vampire Slayer. While I knew it was a little simplistic, it seemed obvious that the roots of the modern fascination with dating vampire, ghouls, werewolves, etc. arose from the long-running romance between the leads of Buffy and Angel, perhaps the two most successful horror TV shows of the our generation.

Of course, as I explore the modern history of dark fantasy, I find more and more evidence that paranormal romance was alive and well long before Joss Whedon penned his first screenplay. Chelsea Quinn Yarbro’s first vampire romance, Hôtel Transylvania, featuring Count Saint-Germain, was published in 1978, for example. (And the series is still going strong — with volume 26, Night Pilgrims, just released in August.)

Yarbro was hardly the only pioneer in the genre, however. Elaine Bergstrom was working as a copywriter when she wrote her widely acclaimed first novel, Shattered Glass (1989), one of the first vampire romances. It featured a family of vampiric immortals and received a Stoker nomination. She followed up with five additional novels of the Austra family: Blood Alone (1990), Blood Rites (1991), Daughter of the Night (1992), Nocturne (2003), and Beyond Sundown (2011). Here’s the back cover copy for the book that kicked it all off:

Modern technology has rendered the vampires’ night hunt obsolete. But some vampires continue to kill. By choice.

Stephen Austra is a prominent artist, renowned for his wondrous restorations of stained glass in cathedrals and churches. He is also a vampire. But he respects ordinary human lives, and would never hurt a soul. Or so his lover, Helen Wells, desperately wants to believe…

Bergstrom has also written two Ravenloft novels: Tapestry of Dark Souls (1993) and Baroness of Blood (1995). Shattered Glass was published in July 1989 by Jove Books. It is 372 pages, originally priced at 3.95 in paperback. It is currently available in digital format for $3.99.

To call something published in 1989 as “one of the first vampire romances” is just bizarre. Even if you aren’t into classic literature, certainly the name Anne Rice is familiar to you? Carmilla is also pretty famous, and it was a full century older than that.

I know most people seem to think that everything significant was invented within their own lifetimes or just a generation ago, but that’s usually only just what they remember hearing about. Paranormal romance goes back thousands of years.

> To call something published in 1989 as “one of the first vampire romances” is just bizarre. Even
> if you aren’t into classic literature, certainly the name Anne Rice is familiar to you?

Oh, I don’t know. Yes, Anne Rice wrote the first volume of THE VAMPIRE CHRONICLES (Interview with a Vampire) in 1976, but the other nine were written after 1984 (and most appeared after 1994). I consider the third, The Queen of the Damned, to be an early volume in the series, and it appeared in 1988 — less than a year before SHATTERED GLASS.

Perhaps I’m simply looking at things numerically, rather than purely chronologically. If you make a list of the first 500 vampire romances, and call the first 150 or so “early,” I bet you’ll find the line you draw at 150 is somewhere around 2004. The last 350 have all appeared in the last 10 years (and I’m pretty sure the last 200 or so have all appeared in the last three weeks…)

You’re dead right about Carmilla, although that was the obvious example. Can you name any other examples?