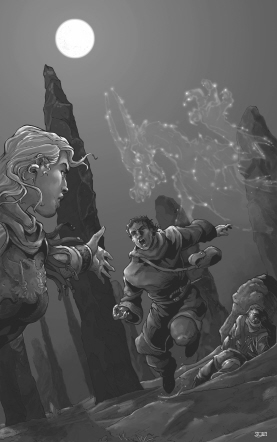 Do you like sword and sorcery? The real stuff, I mean, where sorcery is something dark and dangerous and people get hurt when they fight with sharp edged weapons? Something that’s a little exotic and makes you think of Robert E. Howard and Fritz Leiber, but still is very much its own thing? Then boy have I got a story for you.

“Vestments of Pestilence” is a short story by John C. Hocking… There are some mystery elements, some humor, a lot of action, and considerable sorcery, all told in a smooth first person voice that has echoes of hard boiled heroes like Marlowe and Spade, but not the overblown snark that seems to be so popular in current urban fantasy…

The feel of the story is nice and dark but the story telling itself is very modern. I was aware as I read that the pace and the suspense were slowly being ratcheted up until I was racing through the last couple of scenes to see how things turned out. There’s also some marvelous characterization in the tale, and trust me, in a story of this length, that’s a hard thing to do… This is the real thing for S&S fans.

“Vestments of Pestilence” is the second Archivist tale we’ve published, following “A River Through Darkness and Light,” in Black Gate 15, which SF Site called “a strong blend of the old sword and sorcery action and mood, but with modern attention to character development.”

“Vestments of Pestilence” was published here September 29. It is a complete 10,000-word novelette of sword & sorcery. Read the complete story here.

Read Charles’s complete review on his blog Singular Points. Art for “A River Through Darkness and Light” by Storn Cook.