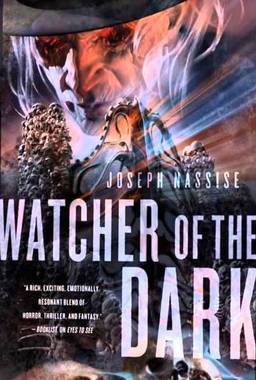 You’d think that, after nearly 40 years of collecting science fiction and fantasy, I’d be accustomed to looking past the cover while on the hunt of promising new books.

Naaah. Good covers are underrated, and great covers can tell you a more than a simple plot summary. And Watcher of the Dark has a very intriguing cover indeed, featuring a fabulously detailed Lovecraftian horror dominating a bone-strewn alien landscape, while a sinister blind man looms over the whole affair, plotting his evil… wait a minute.

Is that blind guy the hero, exorcist Jeremiah Hunt? My. He’s definitely got a certain style (click the image at right for a bigger version.) This is even more intriguing than I thought.

New Orleans was nearly the death of Jeremiah Hunt, between a too-close brush with the FBI and a chilling, soul-searing journey through the realm of the dead that culminated with a do-or-die confrontation with Death himself.

Hunt survived, but found no peace. When he performs an arcane ritual to reclaim the soul of the magically gifted, beautiful women who once saved him, he must flee the law once again, to the temporary sanctuary of Los Angeles, city of angels.

In L.A., Hunt must contend with Carlos Fuentes, who sees in the blind exorcist a means to obtain the mystical key that opens the gates of Hell. Fuentes knows Hunt’s weakness is his loyalty – to the woman he loves and to another supernaturally gifted friend – and threatens to torture them in order to get Hunt help complete his dreadful quest.

Hunt has learned a lot since his life was irrevocably hijacked by faith months ago. But when enigmatic Preacher calls in his marker for helping Hunt in New Orleans, Hunt knows that all his newfound experience and ability will go for naught unless he can keep both the Preacher and Fuentes at bay long enough to somehow find a way to free his friends from mortal peril.

In Watcher of the Dark, take a trip to the dark underbelly of the City of Angels to experience an engrossing mix of fantasy, thriller, and horror. This book is sure to leave you sleeping with the lights on.

The is the third novel in the Jeremiah Hunt Chronicles, following Eyes to See (June 2012) and King of the Dead (November 2012). In their review of Eyes to See, Dread Central noted the novel contains “A bit of Whedon… a bit of Butcher… more than a little Constantine from Hellblazer.” Sounds like a winning mix to me.

Joseph Nassise is the  Bram Stoker Award-nominated co-administrator (with David Niall Wilson) of the long-running horror blog Storytellersunplugged.com. He’s also the author of the Templar Chronicles and By the Blood of Heroes, the first volume of The Great Undead War.

Watcher of the Dark was published by Tor Books on November 19. It is 301 pages, priced at $25.99 for the hardcover and $12.99 for the digital edition. The cover is by Cliff Nielsen.

Is the Carlos Fuentes who is apparently the villain of this novel the same as, or in any way an allusion to, the deceased Mexican novelist of the same name? If so, I wonder what the author’s (presumably metafictional) intentions are? If not, that’s quite a coincidence.

I read the first book in this series, and liked it a lot. Didn’t realize the third one was already out.

> Is the Carlos Fuentes who is apparently the villain of this novel the same as, or in any way
> an allusion to, the deceased Mexican novelist of the same name?

I don’t believe so — although I admit I thought the same thing when I first same the name.

Fuentes isn’t as well known as he used to be (here in the US, at least), so it’s possible it’s just a coincidence.

> I read the first book in this series, and liked it a lot. Didn’t realize the third one was already out.

Thanks for weighing in.