A tight deadline for turning around my galley proofs meant I had to choose: either skip my regular blogging gig here, or blog about the only book I’ve had time to look at for the past two weeks: my own. I can’t very well review a book I wrote–not just because of the temptation to brag about it, but also because the nitpicky galley proof process is forcing me to second-guess every word of it, at a point in the production process in which only a few of those words can be changed. Should you buy my book? If anyone had asked me last night while I was doing battle for the last time with a paragraph that has been driving me crazy for the past seven years, I honestly don’t know what I’d have said. John O’Neill assures me that Black Gate‘s readers will be interested in my own experience writing a fantasy series and preparing it for publication, so here goes.

Once upon a time, there was a call for short story submissions from a horror magazine. The editors were looking for very short works of psychological horror on the theme of “the life interrupted.” I tend to write long, and I’d never written horror before (and since the story that came to me grew up to be a comedy, I still haven’t), so I thought I’d challenge myself by trying to write something for the call. I wanted to start with a character whose life, pre-interruption, was already unusual. My protagonist arrived in my head by way of this personal ad on the fictitious dating website PaganSingles.com:

What would be the most horrifying interruption possible in the life of a skeptical post-modern Neo-Pagan who prides herself on not being a New Ager? Discovering that the New Agers were right about something, anything, and why not Atlantis?

I put my girl on the Jersey Shore in hurricane season, and a hundred and some pages later, I had a chunky novella I tried to describe as a comedy of epistemology. “No,” said one of my beta readers, “this is what you’d get if Kevin Smith gave the Clerks/Dogma treatment to the whole genre of paranormal romance.”

To which I replied, “This plot is to paranormal romance what Rosencrantz and Guildenstern Are Dead is to Hamlet.”

Well, that sounds impossible to sell, doesn’t it? After the manuscript had collected its rejections from just about every SF/F magazine that published novellas, I tried to trunk it and just stick with the epic fantasy I’d been working on.

Instead, I found myself writing two prequels about other members of the coven, and I’ve had more success (albeit in small press) with this series than with anything else I’ve done.

Which brings me to the technical challenges that arise from starting a series by accident.

If you know you’re embarking on a series, you keep track of your details. If your cast is large, you might keep a Dramatis Personae document and add characters as you come up with them. If your history is long, you might keep a chronology table and add significant events and their dates as they come to you. Keeping a series bible is not guaranteed to protect you from blunders–I once discovered that, in a first draft, I had claimed that a character’s parents died in a riot that occurred ten years before that character was born–but it’s mighty useful for spotting and fixing blunders before they go out into the world of readers.

If you don’t know you’re embarking on a series, if in fact you think you’re writing a one-off short story and you’re aiming to bring it in under ten pages, you might not start a series bible for some time. Oops.

When I wrote “Atlantis Cranks Need Not Apply,” I was taking a break between drafts of an epic fantasy novel I was trying to cut down or split from its ungainly first-draft length of about 300,000 words. Compared to that doorstopper of a family saga, the contemporary fantasy novella’s 25,000 word length felt light and breezy. It was refreshing to throw in small details and let them be just little grace notes, without having to trace their implications for a century in either direction in my fictional history. How had the secondary characters spent their childhoods? It didn’t matter! 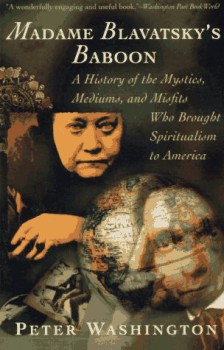 Shortly after I gave up trying to sell “Atlantis Cranks,” I was mugged by a new story. I helped an old friend clear out his late father’s house, and as I stuck price tags for the estate sale on a staggering hoard of the old gentleman’s bizarre purchases, I said to my friend, “To him, every one of these objects made perfect sense. I just can’t imagine what that sense could possibly have been.” My writing mind lit up with a scene like ours, only with a fantastical logic behind the hoarding, and a few seconds later the story had appropriated two secondary characters from “Atlantis Cranks” to live that scene. Five minutes later, I knew everything about the childhoods of those siblings in a household of old-school ceremonial magicians in the lineage of Madame Blavatsky. Finally, my dissertation research on modernist poets and the occult came in handy for something! Three months later, I had a 30,000 word novella that was, unequivocally, the best project I’d ever finished.

Translate the above into career-ese, and the key detail is that I had a 30,000 word novella, a length and form that no fantasy market paying pro rates wanted to see from any author who hadn’t topped the bestseller lists. I polished “Closing Arguments” up so it could stand alone because I hadn’t found a home for “Atlantis Cranks,” sent it to collect its share of rejection slips, and then trunked it.

Here’s the thing about novellas: many people will tell you the novella is a form on the edge of extinction, because readers don’t generally have a strong sense of what it is, and because the best-paying fiction markets rarely buy them, so professional writers try to avoid writing them. On the other hand, the rise of e-books seems so far to favor novellas, to such a degree that some small presses describe the form as the perfect length to consume on an e-reader.

I eventually sold “Closing Arguments” to a small press that then picked up “Atlantis Cranks,” too. The publisher decided to release “Closing Arguments” first, because the events of that story unfold two years earlier than the ones in the novella I actually wrote first. That publisher asked for a third novella, and the story that mugged me next was set in between the two spans of time of the other stories. Those other stories had taken me about three months each to get into first working draft. I started the third novella shortly before I gave birth to my first child, and only finished it when my second child was two years old.

It didn’t help that the main character for “And Ria’s from Virgo” is a professional astrologer with obsessive-compulsive disorder. I took it into my head to peg every incident in her story to real horological astrology from the months in which the story is set. Oh, man. Don’t try this at home. Not only did I need a series bible–I needed a chronology that broke incidents down to the level of minutes so that Ria could interpret (and misinterpret) her world in a way that was true to her background and malady. More than once, I told myself the story would have been faster and easier to write if I had just built a giant orrery in my living room.

By the time I was done writing “And Ria’s from Virgo,” my first publisher had gone under, as small presses sometimes do. I resold the series on the first query I sent out, to a larger and better established small press. The publisher of Dark Quest Books had read “Closing Arguments” when it first came out, and liked it enough to wish he’d published it himself. Instead of publishing the novellas separately as stand-alone works, which had made sense for a publisher who focused on e-books, Dark Quest will publish the three novellas together in a single print volume under the title Tales from Rugosa Coven.

It was up to me to decide how to sequence the stories: in the order in which I had discovered and written them, or in the order of the events in the characters’ fictional world. I chose the latter. It’s probably the right choice, but I have to say, as I wrestle with the galleys, it feels weird to me to end with the story I wrote first, and a conclusion I came up with long before I had any idea how much it would be concluding. For the characters and most readers, the series follows one linear path. For me, it will always follow a different one.