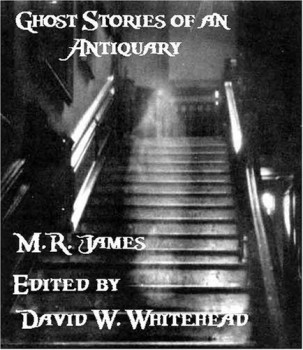 Hallowe’en always passes, for me, with a waft of melancholy, like a chilly breeze blowing down the last few clinging maple leaves.

This October was a busy one for me. Five days out of seven, I was hosting a ghost tour, accompanied on many of those nights by a bona fide “paranormal investigator.” The thirty or so guests we conducted into the shadows each night had quite a time and I must admit — note that I characterize myself as an “open-minded skeptic” — I may have had a paranormal experience or two myself. After having been “Haunted Master of Ceremonies” for these tours the past three years, dozens of evenings, that was a first. Maybe I’ll write about it sometime, somewhere. I have to process it a bit more first, try to debunk it and exhaust alternate explanations.

You might say I have a little Scully and a little Mulder in my head. Not that I have split personality disorder or anything, but when something happens, these two sides of my mind — the rational, scientific side and the childlike-wonder side who “wants to believe” — begin laying out their competing narratives to explain the event. Which side wins out? Both. Neither. This world is a mysterious place and no one’s gotten to the bottom of it. I certainly won’t.

I’ll just keep celebrating the mystery and fastidiously trying to avoid ever getting bored by it. Boredom is the end; it’s death; it’s deciding you don’t really care what’s going on. Whenever that starts to happen (and it does, friends, as you creep along toward gray hair and creaky bones), I retreat to the proverbial “black gate,” to the wellsprings of fantasy, to the towers of science fiction, to the tombstones of horror. Visiting imagined worlds reminds the disenchanted traveler how endlessly bizarre and fascinating and surprising is this world in which we live. 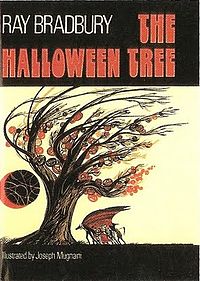 I know that’s a theme I’ve sounded many times on this blog. Not to be repetitive, but because it is a theme that resonates and it justifies many of my most steadfast interests that have consistently maintained throughout four decades, from the boy who first visited Barsoom and Narnia and Middle-Earth through to the teen who thought of becoming a pastor, the young man who became a stage actor, the thirty-something who obtained a master’s degree and taught college, the middle-aged man who started a family and who is still seeking his place and his calling.

This is a good time of year to get in touch with old ghosts: the ghosts of those who have passed on and also the ghosts of one’s own past selves.

I didn’t do a ghost tour Hallowe’en night. No sir, that’s my holiday. Our holiday — I had a date with a four-year-old steampunk fairy and a two-year-old pirate and a Radio Flyer wagon large enough to accommodate them and all the sugary swag they gathered in raids up and down the streets of our little hamlet. 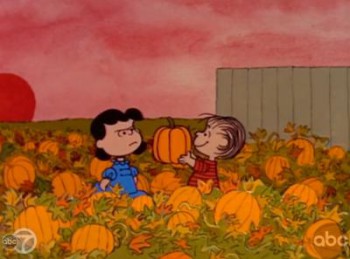 One neat thing about trick-or-treating here in Minnesota is it looks like Hallowe’en. I grew up in Phoenix, AZ, watching It’s the Great Pumpkin, Charlie Brown — Charles Schulz and his Peanuts gang were all Minnesotans — and absorbing the Ray Bradbury-esque picture of what it should be like (Illinois native Bradbury reinforced that upper-Midwest backdrop).  Hallowe’en, as depicted in popular imagery on greeting cards, decorations, and TV specials, has that recognizable quality, just as surely as Christmas is popularly depicted with snow and people in Victorian dress sledding down the slopes and riding in horse-drawn sleighs (another vision that in no way matched the desert metropolis where I lived).

When I step outside my door here, I see Hallowe’en. I feel it in the nip in the air, hear it in the crunching leaves under my soles. 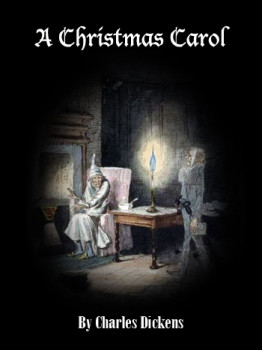 Now, on this gray, cold, rainy day with snow in the forecast, it is over for another year. This is the gray time preceding a white Christmas. The major retailers did not miss a beat: November 1, nearly every last vestige of Hallowe’en was gone, replaced by lit trees and candy canes.

I love Christmas too. With little ones now, especially, it is another holiday that looms big on the horizon.

But lest one miss the ghost stories and haunted-house tales of Hallowe’en, let me remind readers of this historical fact: Christmas was long associated with ghost stories. Charles Dickens’s A Christmas Carol comes out of this tradition.  Hell, M.R. James wrote his entire oeuvre of celebrated ghost stories for sharing with friends at Christmas.

Like the triumvirate of All Hallow’s Eve, All Saint’s Day, and All Soul’s Day, the winter solstice was also associated with a time of year where the veil between living and dead grew thin. The dead were remembered and, in case their spirits were restless, placated in various ways. It was the season associated with death for obvious reasons: everything dies (or at least hibernates) under a blanket of chilling frost; winter sets in, and the days grow shorter until you come to the shortest, darkest day, the day when night holds sway. Although most historians don’t believe Jesus was born anywhere near this time, the early Church moved the celebration of the Christ child’s birthday to its proximity with winter solstice, both to capitalize on the winter festivities that already took place in pagan tradition and for its metaphorical resonance: the light is coming into the world at the time when the world is most in the thrall of death.

So, like Dickens and James, I try to keep the tradition alive of telling ghost stories at Christmas-time. Hey folks, try this: how about, in between the regular rotation of Miracle on 34th Street and It’s a Wonderful Life, insert The Haunting? In doing so, you’ll be acting more faithfully to tradition than you might think.

Leaf 3: Where the hell is Arak? 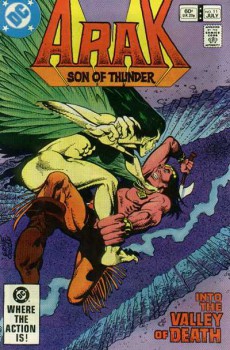 Yeah, I promised those following my blogging of Arak, Son of Thunder that I’d return to that series with issue 11 in November. In the midst of shuffling around jack-o-lanterns and rubber bats and home-made gravestones, I misplaced the issue, which I had set out in order to resume the series today. I’ll have more time on my hands now and I’ll hunt it down. I’ll revisit that issue for next week. I say “revisit” because issue 11 was actually the first issue of Arak I ever bought, back when I was still legitimate trick-or-treating age.

Even those who don’t care less about the Arak comic-book series might want to check out next week’s post, because I’ve long planned on addressing with issue 11 the topic of sex in comics, and its impact on an 11-year-old kid just on the cusp of puberty. I want to tackle the issue with an appropriate measure of sensitivity, decorum, and maturity, while simultaneously attempting to encapsulate how things were much different for adolescents back then. That was the last age just before the Internet came along and wiped out any mystery for youth curious about this concealed corner of the adult world. The cultural differences in this one aspect between just a couple decades ago and now are, I believe, well worth noting. Arak issue 11, surprisingly, gives me a golden window of opportunity to note them.

See you next week.

Speaking of M. R. James and his wonderful ghost stories, one of the Old Time Radio episodes I ran in the run up to Halloween was one of James’s most famous stories, “Casting the Runes”:

@DTruesdale: I love M.R. James and I love Old Time Radio — thanks! And as per the observation I made in my post, listening to (or reading) some James between now and Christmas would be just as fitting as before Halloween, if not more so.