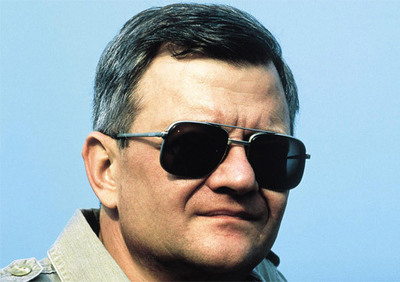 Thomas Leo “Tom” Clancy, Jr, one of the top-selling authors of the past three decades, died yesterday after a brief illness.

Clancy published his first book, The Hunt for Red October, though the tiny Naval Institute Press in 1984. He’d written several articles for the Proceedings of the Naval Institute and, although they’d never published a novel, he sent them Red October after it was rejected by several major publishers. To his surprise, they accepted it and paid him a small advance.

President Ronald Reagan turned the book into a best seller when he mentioned it during a televised press conference, saying it was “unputdown-able” and a “perfect yarn.” It sold more than five million copies, and became a hit film in 1990 starring Alec Baldwin and Sean Connery. Clancy won a $3 million contract with mainstream publisher Putnam Penguin for his next three books.

Clancy published a total of 28 books, 17 of which hit The New York Times best-seller list — many at No. 1. His novels have been licensed for several major video game franchises, including Rainbow Six, Ghost Recon and Splinter Cell. Eight of his books feature his most famous character, CIA agent Jack Ryan, including The Hunt for Red October, Patriot Games (1987), The Cardinal of the Kremlin (1988), Clear and Present Danger (1989), and The Sum of All Fears (1991).

Ryan returned in Debt of Honor (1994), in which a fictional war with Japan results in the destruction of the U.S. Capitol building during a joint session of Congress, elevating the reluctant Vice President Ryan to the Presidency; he returned again in Executive Orders (1996) and Red Rabbit (2002). Four of the Ryan novels — The Hunt for Red October, Patriot Games, Clear and Present Danger, and The Sum of All Fears — have been adapted as feature films, with Alec Baldwin, Harrison Ford, and Ben Affleck playing Jack Ryan.

Clancy passed away yesterday in a Baltimore hospital near his Maryland home. He was 66.

I fondly remember spending thirteen and a half hours reading Red October the day before I was going to go see the movie with my dad at the Senator theater — a personal best at the time for a fledgling bibliophile. Might be time to dust that old paperback off again and show my younger self how it’s done.

I only read the early Clancy, but enjoyed them all. It should be mentioned that Red Storm Rising, which was probably my favorite after Red October, was his novel of a possible conventional World War III scenario, that and the novel about a second US-Japan war makes him a bit of a specficcer doesn’t it?

2013 has proven a grim year for writers.

As far as adaptation for other media went, he did passably well, compared to Clive Cussler and some others. Of course, since about 1970, most of the more prominent franchises derive either from children’s literature, juvenile or adolescent literature, or from authors with low box scores who wrote duologies or singletons that served as the source for adaptation expansion, for baseless sequels.

http://thelatarniaforums.yuku.com/topic/11820/Where-are-the-heroes#.UhmRyRzGqL8
But those really well thought through heroes who emerge primarily from literature into mainstream culture do seem a little rarer. Maybe because most heroes that break across culture now seem to owe their origins to TV, films, games or comic books.

Incidentally, this may leave Van Wyck Mason as the U.S. author (as well as possibly English language author) with the longest running espionage novel series around one hero written by one author.

> Red Storm Rising, which was probably my favorite after Red October, was his novel of a possible conventional World
> War III scenario, that and the novel about a second US-Japan war makes him a bit of a specficcer doesn’t it?

I think so, yeah. Even more to the point, most of the properties he’s helped create for video games — especially EndWar, Splinter Cell, and Rainbow Six — were set in near-future SF timelines.

Mention the name “Tom Clancy” to my two game-playing sons, and they say “That science fiction guy?”

> As far as adaptation for other media went, he did passably well, compared to Clive Cussler and some others.

Okay, I have to stop you right there and say that SAHARA — the Penélope Cruz/Matthew McConaughey pic adapted from the Clive Cussler novel — may not have been a big hit, but it’s one of my family’s favorite movies. I’ve lost count of how many times we’ve watched it. My kids have much of the dialog memorized.

The Jack Ryan films were very nicely done, but they don’t have nearly the level of humor (and constant, RAIDERS OF THE LOST ARK-like excitement) that SAHARA does.

“SAHARA…A fine, underrated family film. And William H. Macy is brilliant as Admiral Sandecker.”
I am in complete agreement. Odd that I enjoy a film so much that the author of the source material loathes to the extent of engaging the producers in lengthy and expensive litigation.

I read Red Storm Rising in high school and loved it. Never read anything else, but still that was a big book, so it should count for a couple, right? 🙂 Also, Red October has to be one of my all-time favorite movies. However, I’m pretty sure Clancy wasn’t the best ‘person’ as I’ve heard a lot of bad things about him as a human being.