AN: Hello all. My name is Liz, and you may remember me from a few years back! I was a Black Gate blogger for a brief period before life happened, as it does, in spectacular fashion. But our esteemed editor has been kind enough to invite me back! So I’ll be posting regularly now, and continuing this series. Ancient Worlds will focus on the roots of Fantasy and Science Fiction in Ancient Literature, beginning with Homer’s Odyssey. I hope you’ll enjoy it. 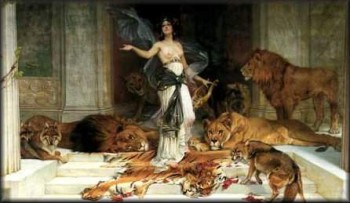 The Odyssey is full of compelling archetypes, but she’s hard to top. She’s beautiful, powerful, terrifying, and sexy as hell. If you’ve ever been attracted to, or wanted to be (or both), the femme fatale, you should raise a glass to her.

Circe first appears in The Odyssey. As Odysseus leads the longest road trip in the history of the world, they wash up on Aiaia. Seeing a cookfire in the distance, Odysseus sends a band of men to investigate.

A few hours later, only one of them returns to inform the king that all of his men have been turned into pigs by an evil witch.

He couldn’t take those guys anywhere.

Odysseus heads off to rescue his men, again. He’s stopped by Hermes, the messenger god, who has been sent to warn him that he should eat a magical herb, moly, in order to be immune to the witch’s transformation spell.

Following this advice, Odysseus survives dinner without being turned into one of Circe’s pets. He then draws his sword and threatens to attack her. Circe responds by inviting him into her bed.

Yeah. There’s nothing even vaguely Freudian about that. 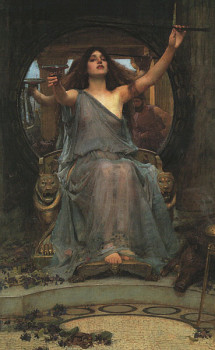 Odysseus, being immune to Circe’s magic but not her charms, immediately agrees. On the condition that she swears not to use her magic against him. (He’s afraid she’s going to steal his manhood.)

She agrees, they hop into the horizontal hokey pokey, he gets his men back, all is well.

It’s going so well, in fact, that he decides to stay for an entire year. His men feast and drink; he does what apparently every trickster-hero will do when confronted with a gorgeous, intelligent, powerful sorceress; and then next thing they know it’s twelve months later and they have forgotten to go home.

Circe, sorry to see Odysseus go, but probably eager to get the rest of his crew out of her house, then tells them that the only way they’re going to get home is to talk to Tiresias, the blind seer.

Trick: Teiresias has been dead for some time.

Solution: Circe gives them a full set of directions to the land of the dead, complete with instructions for how to communicate with the shades there.

In many ways, Circe is the epitome of the male fantasy, the woman who’s brought to her knees when confronted with our brave hero. But to dismiss her as nothing more is to shortchange her considerably.

Circe is a fascinating figure in her own right. She’s a minor goddess, the daughter of Helios and either a sea nymph or the goddess of witchcraft herself, Hekate.

In a culture that kept women cloistered and under appropriate supervision at all times, she lives on her own, beholden to no one.

Her knowledge of witchcraft and hidden lore also puts her on par with Odysseus. There are three women that we see him in any kind of serious relationship with: his wife Penelope, the goddess Athena, and Circe. (There’s Calypso as well, but it’s clear he doesn’t want to be there.) All three are extraordinary for their intelligence and their cunning.

Circe’s other notable appearance is in the Argonautica, the epic that tells the story of Jason and the Argonauts. In the great, tangled, family wreath that is Greek myth, Circe is also the aunt of Ancient Myth’s other famous witch, Medea. We’ll talk more about her later, but when Medea and Jason murdered Medea’s brother, they fled to Circe’s island to obtain ritual purification. She plays less femme fatale here and more disapproving auntie, but she grants them absolution and sends them on their way.

Circe is more than just the smoldering temptress (although she’s stellar in that role too). She is the keeper of knowledge, a voice connecting the worlds of the divine and the mortal, a wayfinder, and a guide to heroes.

She has inspired witches and wild women from Cleopatra to Once Upon a Time’s Evil Queen, Regina. In an epic full of fascinating characters, she’s my favorite.

Who is your favorite Naughty Sorceress?

I’m kind of leaning towards Ayesha from H. Rider Haggard’s She, although “sorceress” might be a bit of a stretch.

My favorite bit of the Argonautica is when Jason looks into an unlit room to see Circe and Medea sitting on either side of a cold hearth. Because both women are of the lineage of Helios, their eyes glow golden in the dark. It’s so beautiful and creepy, and Jason is struck by wonder and terror by this savage woman who dismembered her own brother for love’s sake. We readers know how Jason and Medea’s marriage ends, so we get to have the horror-movie sensation of wanting to shake the hero and tell him to run.

Now I want a James Enge translation of the Argonautica.

Sarah – There are so. Many. Amazing scenes in the Argonautica, and that is definitely one of them. We’ll have an entire entry on Medea, without a doubt.