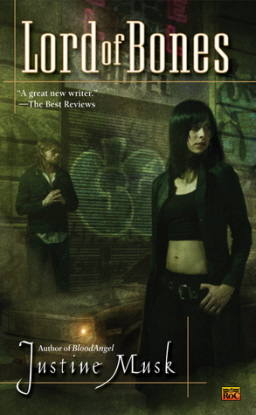 I like to try new titles and new authors, especially a new fantasy series. This genre is so rich and diverse that no one can encompass it all, and if you’re not constantly willing to dip your toe in the water, then maybe you should try another hobby.

So I was delighted to see that Amazon had discounted the second volume of a promising new dark fantasy series, Lord of Bones, to just $1.30. I snapped up a copy immediately. (If you’re interested, I suggest you do the same — Amazon’s bargain pricing algorithm is notoriously fickle.)

Lord of Bones was written by Justine Musk, who has lived a fascinating life. I know, lots of writers claim to have lived fascinating lives, what with being an ambulance driver in World War I or assistant to Anna Wintour at Vogue or something. But seriously, Musk’s life is fascinating. She was the first wife of Elon Musk, founder of PayPal and SpaceX, and her famous article “I Was a Starter Wife”: Inside America’s Messiest Divorce” is filled with quotes like this:

In the late spring of 2008, my wealthy entrepreneurial husband, Elon Musk, the father of my five young sons, filed for divorce. Six weeks later, he texted me to say he was engaged to a gorgeous British actress in her early 20s… Her name is Talulah Riley, and she played one of the sisters in 2005’s Pride and Prejudice. Two of the things that struck me were: a) Pride and Prejudice is a really good movie, and b) My life with this man had devolved to a cliché…

The first crowded apartment we’d shared in Mountain View seemed like ancient history from our 6,000-square-foot house in the Bel Air hills. Married for seven years, we had a domestic staff of five; during the day our home transformed into a workplace. We went to black-tie fundraisers and got the best tables at elite Hollywood nightclubs, with Paris Hilton and Leonardo DiCaprio partying next to us. When Google cofounder Larry Page got married on Richard Branson’s private Caribbean island, we were there, hanging out in a villa with John Cusack and watching Bono pose with swarms of adoring women outside the reception tent… I spent an afternoon walking around San Jose with Daryl Hannah, where she caused a commotion at Starbucks when the barista asked her name and she said, blithely, “Daryl.”

I played in the same corner of Silicon Valley as Musk’s ex-husband Elon for a few years. I was an early investor in Paypal’s primary competitor, iEscrow. We were growing like crazy, talking about an IPO, when Elon’s Musk’s tiny upstart Paypal displaced us as eBay’s preferred payment broker in the late 90s.

eBay bought Paypal for $1.5 billion dollars two years later, iEscrow quietly went out of business, and I never got to have coffee at Starbucks with Daryl Hannah like Justine Musk. Figures.

Still, Musk seems to have put that experience to good use in her fiction. Lots of fantasy authors, when they try to write about the lives of the rich and powerful, can’t pull it off with any verisimilitude. Musk has lived it.

Now, before you get your back up, Justine Musk is not just a bored Silicon Valley divorcee playing in your back yard. She has more writing cred than you do. I could use as evidence her first three novels — Blood Angel (2005), Uninvited (2007) and Lord of Bones (2008) — but instead I’ll just point you towards her famous poster, “25 Badass Ways to Say No.” Q.E.D.

Anyway, back to Lord of Bones. It looks intriguing and cool. I bet I have the first novel around here somewhere (give me long enough in the basement, and I could probably produce a Gutenberg Bible and the complete lost works of Aristotle), but I think I’ll start with this one. 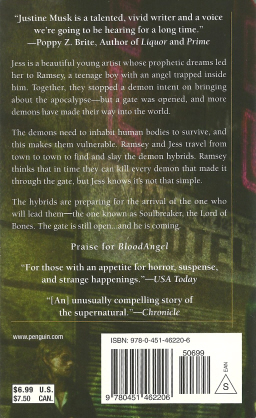 Jess is a beautiful young artist whose prophetic dreams led her to Ramsey, a teenage boy with an angel trapped inside him. Together, they stopped a demon intent on bringing about the apocalypse — but a gate was opened, and more demons have made their way into the world. The demons need to inhabit human bodies to survive, and this makes them vulnerable. Ramsey and Jess travel from town to find and slay the demon hybrids. Ramsey thinks that in time they can kill every demon that made it through the gate, but Jess knows it’s not that simple.

The hybrids are preparing for the arrival of the one who will lead them — the one known as Soulbreaker, the Lord of Bones. The gate is still open… and he is coming.

I sat down with Lord of Bones last night, and stumbled on this disturbing dedication as soon as I cracked it open:

A quick look at Musk’s bio reveals that she had a child who died at 10 weeks of SIDS — a horrible tragedy — and this dedication seems to indicate it’s not the only tragedy in her life. There’s no mention in her bio who the young Jacques might have been however, so for now it’s just part of the mystery.

There have been no additional novels in the Blood Angel series since Lord of Bones appeared in 2008. But Musk remains very active on her blog, justinemusk.com, so I wouldn’t count her out just yet.

Lord of Bones was published in July 2008 by Roc Books. It is 378 pages, originally priced at $6.99 for both the paperback and digital editions. It is still in print, but the Amazon discount has the look of a clearance sale. If you want a copy, I would act quickly.