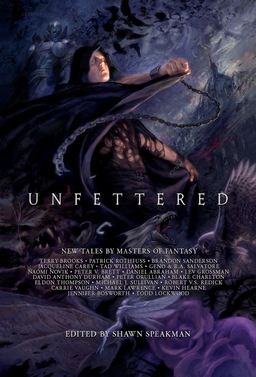 Unfettered is a monster anthology with an unusual genesis.

It started with editor Shawn Speakman, who became friends with Terry Brooks a few years back and wrote his own fantasy novel, The Dark Thorn. When Shawn was diagnosed with Hodgkin’s lymphoma in 2011, Brooks donated an original short story to help Shawn pay his mounting medical bills — and suggested that Shawn ask some of his writer friends to do the same.

The result is a massive 518-page tome containing original stories in some of the most popular fantasy series on the market, from some of today’s hottest writers — including Tad Williams, Patrick Rothfuss, R.A. Salvatore, Robert Jordan & Brandon Sanderson, Peter V. Brett, Lev Grossman, Carrie Vaughn, Jacqueline Carey, Mark Lawrence, and many others.

The tales included are set in the worlds of Shannara, the Wheel of Time, the Demon Cyle, Temeraire, Kushiel, Vault of Heaven, the Broken Empire, and many other top-selling series.

As the title suggests, authors were free to contribute whatever they desired.

This book really is a once-in-a-lifetime event and, as the marketing copy states, a testament to the generosity of the science fiction and fantasy community.

Here’s the impressive Table of Contents.

“Imaginary Friends,” by Terry Brooks (a precursor to the Word/Void trilogy)
“How Old Holly Came To Be”, by Patrick Rothfuss (a Four Corners tale)
“River of Souls,” by Robert Jordan & Brandon Sanderson (a Wheel of Time tale)
“The Old Scale Game,” by Tad Williams
“Game of Chance,” by Carrie Vaughn
“Martyr of the Roses,” by Jacqueline Carey (a precursor to the Kushiel series)
“Dogs,” by Daniel Abraham
“Mudboy,” by Peter V. Brett (a Demon Cycle tale)
“The Sound of Broken Absolutes,” by Peter Orullian (a Vault of Heaven tale)
“The Coach With Big Teeth,” by R.A. Salvatore
“Keeper of Memory,” by Todd Lockwood (a Summer Dragon tale)
“Heaven in a Wild Flower,” by Blake Charlton
“The Chapel Perilous,” by Kevin Hearne (an Iron Druid tale)
“Select Mode,” by Mark Lawrence (a Broken Empire tale)
“All the Girls Love Michael Stein,” by David Anthony Durham
“Strange Rain,” by Jennifer Bosworth (a Struck epilogue tale)
“Nocturne,” by Robert V. S. Redick
“Unbowed,” by Eldon Thompson (a Legend of Asahiel tale)
“In Favour With Their Stars,” by Naomi Novik (a Temeraire tale)
“The Jester,” by Michael J. Sullivan (a Riyria Chronicles tale)
“The Duel,” by Lev Grossman (a Magicians tale)
“Walker and the Shade of Allanon,” by Terry Brooks (a Shannara tale)
“The Unfettered Knight,” by Shawn Speakman (an Annwn Cycle tale)

Unfettered was published on June 21, 2013 by Grim Oak Press. It is 518 pages, priced at $9.99 for the digital edition and $35 for the hardcover (available at Subterranean Press.)

I’m surprised to see this here. I’ve had this for a few weeks now but i haven’t read any of the stories.

I’m a huge Salvatore fan and i couldn’t handle him writing a story and me not having it. and i’m sure i’ll like a lot of the other stories.

Something is was surprised by was the original Wheel of Time story by Sanderson (even though i don’t plan on ever reading wheel of time.)

You’re more on the ball than I — I just learned about it yesterday! I got an e-mail from Subterranean advertising per-orders fr the hardcover, which apparently is ready to ship.

I grabbed the Kindle edition, and devoured it. There are some great stories in here. And that Wheel of Time story is supposed to be the last one Sanderson ever does.

I great book for a great cause. definitely worth getting.