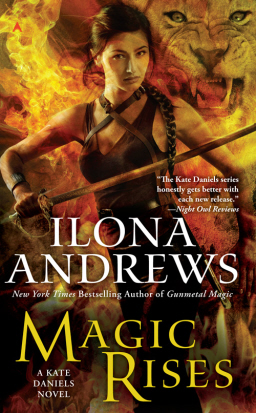 I’ve been hearing more and more about Ilona Andrews recently — and all of it good. “Ilona Andrews” is the pen name for husband-and-wife writing team, Ilona Gordon and Andrew Gordon, and their latest novel, Magic Rises, just got a rare 5-star review over at our buddy site, SF Signal. Here’s Kristin Centorcelli:

The fight scenes are superb, as usual, and you’ll want to keep an eye out for the scene in which Kate spars with their host. Magic Rises goes to some pretty dark places, but the stakes are very high, and expect some major game changers here… The story is made much richer by having read the previous books in the series, but I can honestly say that new readers could start with this one as well (though I would recommend starting with book 1, Magic Bites, because it’s, well, awesome).

I have to admit, I’ve been stagnating a bit where urban fantasy is concerned, but Magic Rises has reawakened my love for the genre. Urban fantasy absolutely does not get much better than this.

For those of you who need more than just a great review, here are the details:

Mercenary Kate Daniels and her mate, Curran, the Beast Lord, are struggling to solve a heartbreaking crisis. Unable to control their beasts, many of the Pack’s shapeshifting children fail to survive to adulthood. While there is a medicine that can help, the secret to its making is closely guarded by the European packs, and there’s little available in Atlanta.

Kate can’t bear to watch innocents suffer, but the solution she and Curran have found threatens to be even more painful. The European shapeshifters who once outmaneuvered the Beast Lord have asked him to arbitrate a dispute — and they’ll pay him in medicine. With the young people’s survival and the Pack’s future at stake, Kate and Curran know they must accept the offer — but they have little doubt that they’re heading straight into a trap…

Magic Rises is the sixth volume in the Kate Daniels series, which opened with Magic Bites. It was published today by Ace Books. It is 355 pages, priced at $7.99 for both the paperback and digital editions.