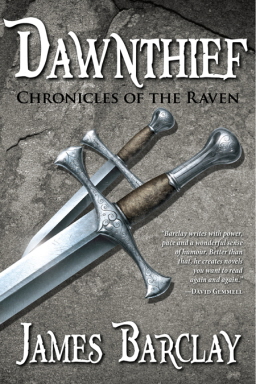 Balia, the setting of Dawnthief, isn’t a very nice place, not at all. Rape, murder, betrayal, lust, and just plain old human cruelty, yep it’s all here by the bucket-load. But as interesting as the world is, it can’t even compare to the people who populate it.

Dawnthief follows a group of mercenaries called ‘The Raven’ as they are employed by one of the four magic colleges, Xetesk, to find Dawnthief, a spell apparently designed to end the world and the only thing capable of destroying the ‘wytch lords’: all powerful beings bent on destroying the world, who for no particular reason, have decided to wake up again, and, for no particular reason, destroy the world.

Needless to say, our intrepid adventurers set out to stop them, accompanied all the while by Denser, a mage from Xetesk, sent to oversee the operation, cast Dawnthief and cause a lot of trouble for The Raven. Now in order to do what they want to do, they must find four catalysts, which are basically the things needed to cast a spell. These are located across Balia and must be found if they are to have any chance of success.

The plot is the book’s weakest point; it all feels a bit clichéd, a bit tired and, to be frank, a bit boring. The catalysts serve only to ferry the team from one battle to the next, all they do is give the group an excuse to move from point A to point B and set up the next fight, or puzzle.

It’s not exactly original either, is it? Just another “save the world from the dark lord” story, another Lord of the Rings mimic; tried and true, but contrived and unoriginal. I mean come on, care a little bit.

Then there’s the Wytch lords themselves, who throughout the book are touted as the most powerful beings ever to exist. For most of it, I believed the hype, the way everyone spoke about them with such fear, such stark trepidation, it was, undoubtedly, impressive, and very, very well executed. By the end, I couldn’t wait for the final confrontation, the climax, the epic battle that would decide the fate of the characters I had fallen so in love with and when it finally came it was…

It was okay. Well no, that’s putting it lightly. It was a disappointment; 500 pages talking up these seven dark lords with the power to crush a continent, and we get a battle about as intense as eating a cheese sandwich.

I know, right? It never actually feels like an earth-shattering conflict and sometimes it doesn’t even feel like a conflict at all. I never felt like the various heroes were in any kind of danger, thanks to just how puny their so-called opponents seemed.

In fact, Barclay has a rather annoying habit of telling rather than showing; all through the book I was told just how amazing and efficient and brutal The Raven are, and though they certainly aren’t pathetic, rarely ever did something come along that made me whole-heartedly agree, and it’s almost infuriating. As warriors, they just came across as average; not the invincible icons everyone said they were, just average.

Perhaps this was to show us just how much age has affected their skill (they’re in their forties) but, considering we’re not really given a basis for comparison, that doesn’t really stand up.

Never fear though; the minions of the Wytch lords — The Wesmen, from the west — are slightly better executed, and the way they storm across Balia, literally painting the town red, is a little more satisfying. The battles with them feel a little more authentic, with a ton of blood, overwhelming odds, and climactic lasts stands. Here you really feel the anxiety of the men involved, the passion, the fear, but also the desire to go on, to give others a fighting chance. Not only is it exciting and engaging, it’s immersive, and this makes for some of the best battles in the book — no, some of the best battles in recent memory. 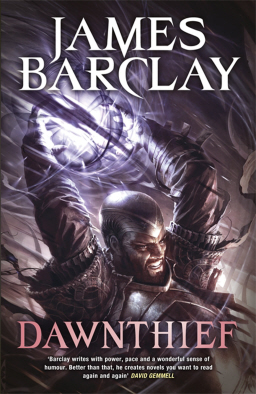 And there are a lot of battles. They’re not pansy battles either; these are full-on, limbs everywhere, blood smeared on the ground, brains-smacked-on-the-rocks battles, and by God are they good. If you’re a gore hound like me, then this is a wet dream. The fights are brutal, bloody, cinematic and excellently described.

The sword blows have a kind of weight to them, much like they would in a good Howard tale. Every fight here — the last one notwithstanding — is intense and exciting, blistering, and impactful. The fights have this kind of silver screen flair, a sort of charm that marks them out and, even if a few techniques are used a little too often, the book’s all the better for it.

That’s not even the best part. In fact, that’s not even half of it; every fight or duel or battle or whatever comes with a very real tension. Barclay has no qualms about killing off any of his characters, or at least putting them through a lot of pain, and this gives even key characters a kind of fragility that I’ve never before seen. A character can die in the blink of an eye, without warning, without build up.

The characters really are human. This is the kind of thing you simply don’t see in Conan books and their ilk, and it really keeps you turning those pages and charging through those chapters. This more than makes up for Barclay’s tell not show habit.

Then there are the characters themselves and they are, for the most part, every bit as good as the battles. The camaraderie within the Raven is almost tangible, the connection between them, at times, feels more important than the ultimate goal, and the sheer fragility of everyone involved only adds to this.

Knowing each member is only a sword blow away from death or a loss away from a breakdown really adds to the story, and was another thing that kept me kept me reading — trying to find out how someone’s going to react to this, or what they’re going to do about that, it’s fascinating. Barclay seems to have a knack for writing for a group and it shows.

Even the personalities compliment the tale; Hirad Coldheart, as bad as his name is, is ignorant and selfish, but not in a way that you hate him. He’s actually likeable, one of the stand out characters; he cares about his friends more than he does the mission, something which leads to countless disputes with Denser.  Then you have Ilikar, a mage of from Julutsa, a college that directly disagrees with Xetesk policies. You can probably guess what happens next. Yep, a whole ton of arguments. Arguments that, considering Barclay’s lack of qualms about killing, make you doubt whether the team will see success.

There are a ton of other characters, most of them interesting, not all of them likeable. The only disappointment is ‘The unknown warrior,’ who’s about as terrible as his name; no, worse than that, he’s just… there, he doesn’t really add to anything, or do anything, he isn’t as likeable as Hirad or as hate-able as Denser. He doesn’t do anything. And because he’s so devoid of personality and purpose, I struggled to sympathise or even care about him, and when his big ‘shock, horror’ twist came along, it didn’t affect me.

Most of ‘The Raven,’ apart from the boring unknown warrior, have a sense of humor and, although it’s not the laugh out loud stuff the back of the book says it is, it adds another layer to an already delicious cake, so it’s not unwelcome.

The world here looks like your typical medieval-ish background and that’s what it is; the culture of Balia isn’t particularly engaging or original, or even cared for, it only really serves to give the quest some sort of moral meaning and impact. But it was so bland I didn’t really care, if there are other cultures in the world then we don’t learn about them, if there’s a religion, it’s not mentioned or explained. It really does feel boring and contrived; there’s no other way to put it to be honest. It’s a far-cry from the lush forests Tolkien produced, or the brutal primitive age Howard dreamed up, and Dawnthief is a lot worse because of it.

Admittedly, the magic here did try to redeem the failings of the rest of the world building, but — though innovative — it stumbled in its attempt. The rivalry between the various colleges, the only two that Barclay bothers with, have already been mentioned, that part is well thought out and adds another side to the story, but it’s not investigated enough. And the intricate workings of the magic system and the colleges who use it was intriguing, but never actually explained with any deal of depth — damn it, Barclay!

Final Verdict 8/10: the characters feel human, their motivations real, the battles are just as bloody, brutal, and gritty as you want them to be, there are bucket loads of moral ambiguity, and truck loads of blood. Sure the story’s a bit bland and the prose is a bit wooden and the world’s about as generic as you can get, but that’s not always why we read sword and sorcery, is it?

And…the book series was inspired by the SPI role playing game Dragonquest. My favorite book in the series was Elfsorrow. I ended up basing an entire Greyhawk campaign upon its central premise. With one small change.

I had the reason for the “wasting of the elves” be due to Gruumsh having assaulted Corellon Laretheon in his home plane and having injured Corellon. The elven god’s blood fell into the pool of life – a pool filled with Corellon’s tears and the source of elven life – corrupting it.

Seriously? I had no idea. We’ve talked about Dragonquest here from time to time… it was a much overlooked RPG, and I think Howard Andrew Jones was a fan. I guess I shouldn’t be too surprised that it’s spawned a novel or three.

If you desire more than anecdotal evidence from me and Howard…here is some from the author’s keyboard http://www.jamesbarclay.com/forum/viewtopic.php?t=35&postdays=0&postorder=asc&start=0&sid=5f270afe92d23082990961755a29fc15

Chronicles of the Raven is what prompted me to expand my DragonQuest collection. I once had “only” the second edition. Now I have Arena of Death, DQ1, DQ2, and DQ3, as well as a module or two.

There was a very good article in an old Dragon magazine that discussed making characters who were incapable of eventually learning to use magic.

I have found the Arena of Death/DQ1 combat system to be very clunky. They fixed a lot of the “I’ll wait and stall adnausium” that existed in 1st edition.

Really? this was based off an RPG? It never really came up in my research but oh well. What’s dragon quest like? I’ve never actually heard of it before, but if it’s good enough to buy all the editions and expansion it can’t be too bad 🙂

Also your right about ‘elfsorrow’, I’ve only had the chance to read a little but what I did read was top notch stuff.

Black Gate » Blog Archive » Who Took the Flowers Out of my Prose?

[…] That’s even the case with recent books I’ve enjoyed, like James Barclay’s Dawnthief, and the novels of David […]

[…] telling and not showing. That’s right, Dawnthief, I’m looking at you. As I mentioned in my review, Barclay (the author of the book) introduced us to the Raven; a group of absolutely useless […]