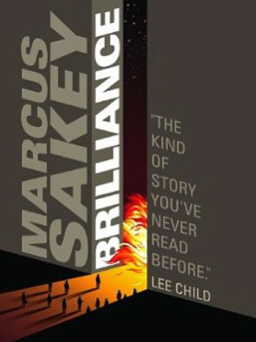 I think of Marcus Sakey chiefly as a thriller writer. Mostly because he is.

Publications like The Chicago Sun-Times call him “a modern master of suspense” and he gets blurbed by fellow thriller writers like Michael Connell (who called him “one of our best storytellers.”) His previous efforts, including The Two Deaths of Daniel Hayes and Good People, were contemporary suspense novels. Sounds like a thriller writer to me.

So at first I didn’t pay much attention to his newest book, Brilliance. My mistake. Set in an alternate reality that diverged from ours in 1980 when 1% of births became people with extraordinary gifts, the novel follows federal agent Nick Cooper, born with the talent to hunt the world’s worst criminals, on the trail of a brilliant whose talent could lead to unheard-of destruction.

In Wyoming, a little girl reads people’s darkest secrets by the way they fold their arms. In New York, a man sensing patterns in the stock market racks up $300 billion. In Chicago, a woman can go invisible by being where no one is looking. They’re called “brilliants,” and since 1980, one percent of people have been born this way. Nick Cooper is among them; a federal agent, Cooper has gifts rendering him exceptional at hunting terrorists. His latest target may be the most dangerous man alive, a brilliant drenched in blood and intent on provoking civil war. But to catch him, Cooper will have to violate everything he believes in — and betray his own kind.

For those of you who care about such things, the novel has already been optioned by Legendary Pictures (makers of 300, Watchmen, The Dark Knight, Man of Steel, and this summer’s best movie, Pacific Rim). For me, the premise alone is intriguing enough to get my attention.

Brilliance will be published tomorrow by Thomas & Mercer, a division of Amazon.com that focuses on mystery and thrillers. It is 452 pages, priced at $14.99 in trade paperback. The Kindle edition lists at $9.99, but is currently just $3.99 — check it out.