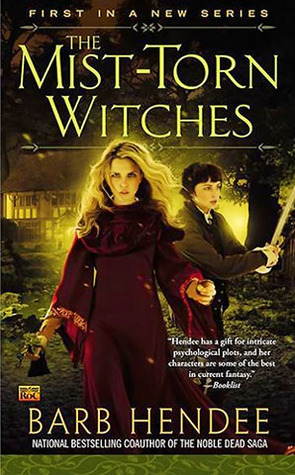 The Mist-Torn Witches isn’t exactly the novel I wanted, but it fits into a category of novel I’d like to see more of. It’s modest in the best senses of the word: Focused on a handful of characters, limited to a single setting (a prince’s castle), and with a tightly focused plot, centered around a magically-enhanced murder investigation. It also manages to be relatively light in pacing and tone, something I’d like to see more of in a market seemingly saturated with the gruesome, grim, and gut-splattered.

Orphaned sisters Celine and Amelie are a likable pair. Celine was trained my her mother as an apothecary, but makes most of her income by pretending to have inherited her mother’s powers as a seer and distributing invented fortunes, while Amelie is an armed-and-dangerous tomboy who serves as the duo’s muscle. They’re forced to flee their rural home when Celine, for the first time, has a truly prophetic vision. Unfortunately for her, that vision is of local ruler Sub-Prince Damek murdering his betrothed after the wedding, which drives Celine to warn the girl away from marrying him.  Celine and Amelie are forced to seek refuge with Damek’s younger brother, Anton, and his brave guard captain, Jaromir.

Anton is a just ruler, and his people are happy, but not all is well within the walls of his castle. Young women are being murdered under mysterious circumstances, their bodies turning up as withered husks. Anton offers the sisters a deal: Use Celine’s newfound powers of true prophecy to find the killer and they’ll be rewarded with an apothecary shop inside his walls. Fail, and they’ll be turned out to make their way alone, vulnerable to the wrath of Sub-Prince Damek.

(A word on that term, “sub-prince”: The nation in which this all takes place is divided up among numerous princes, and the sons of those princes are “sub-princes”.)

The plot proceeds more or less as you’d expect: Futures are read, attempts to protect the victims are made, plots and murderers are uncovered. The cover trumpets that this is the first in a new series, and the ending leaves plenty of room for sequels, but this is a stand-alone novel, more like a mystery-series installment than the commencement of a fantasy epic. And that, honestly, is something I rather appreciate. Not every book can or should be Book One of the Stuff-and-Junk Saga.

The characters are likable, if not especially memorable. Celine has an admirable willingness to do the right thing, regardless of consequences, while Amelie’s loyalty and underlying compassion make her stand out a little from the many tomboy swordswomen who have come before. It’s also nice to see the relationship between two sisters portrayed so warmly, with little hint of competition or jealousy. Jaromir, captain of the guards at the castle, is our other viewpoint character and fills the role of competent warrior whose pragmatism sometimes clashes with Celine and Amelie’s goodness.

The novel’s success is undermined primarily by the generic nature of its setting. There’s pseudo-medievalism here in plenty, with no very creative details that would make this particular castle stand out from the hundred other castles we’ve seen. Soldiers wear chainmail and tabards, villages have butchers and tanners, and there are two kinds of clothing: Either you wear a gown, or you wear a shirt and breeches. It’s a pale version of the actual middle ages, with all the culture and beauty sapped away. If you’re sick of paper-thin medievalism, these aren’t the witches you’re looking for.

I also found the writing quality to range from adequate to poor. Sentences are competently strung together, but I can’t recall more than one or two descriptive passages which achieved any poetry, and the dialogue is workmanlike. Also, Hendee has a tendency to simply tell us what her characters are feeling, or use qualifiers like “seemed” or “appeared” to excess (such as “emerged into what appeared to be a great common dining hall”). Word usage is also sometimes repetitive. Celine experiences “jolts” every time she enters a vision, and the description of moving from real-world sensation to her vision is nearly identical in each instance. This surprised me, because the writing in Hendee’s Noble Dead books (co-authored with husband J.C.) tends to be quite good.

Overall, The Mist-born Witches is unambitious, but enjoyable, and the kind of book I could envision reading in a single sitting.

Sean T. M. Stiennon was discovered as a boy living wild among the elephant herds of Sierra Leone.  Since his return to America, he’s learned how to both read and write with reasonable proficiency, and is in the process of attempting to grow tusks.  But poachers beware—he knows kung fu.