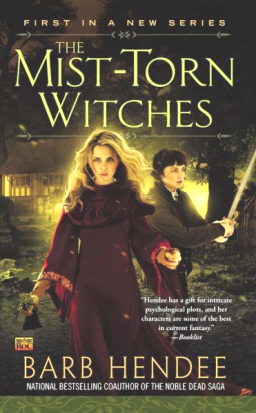 I remember when I first saw Dhampir, the opening volume of Barb and & J.C. Hendee’s Noble Dead saga, back in 2003.

A supernatural medieval fantasy packed with vampire hunters, assassins, ancient castles, and mysterious guilds? That went right on my to-be-read pile. It was still there when Thief of Lives arrived twelve months later. And the third volume, Sister of the Dead. There are now a dozen, and I’ve surrendered all hope. Those two write faster than I can read.

So that’s why I was pleased when Barb Hendee’s solo effort, The Mist-Torn Witches, arrived in May. It’s the first in a brand new series, but it has many of the same elements that attracted me to The Noble Dead. In one volume, I can be on top of everything and not have to hang my head in shame when we talk about Hendee at the Black Gate reading club. Big green recliner, here I come.

In a small village in the nation of Droevinka, orphaned sisters Céline and Amelie Fawe scrape out a living selling herbal medicines in their apothecary shop. Céline earns additional money by posing as a seer and pretending to read people’s futures.

But they exist in a land of great noble houses, all vying for power, and when the sisters refuse the orders of a warlord prince, they must flee and are forced to depend on the warlord prince’s brother, Anton, for a temporary haven.

A series of bizarre deaths of pretty young girls is plaguing the village surrounding Prince Anton’s castle. He offers Céline and Amelie permanent protection if they can use their “skills” to find the killer.

With little choice, the sisters enter a world unknown to them — of fine gowns and banquets and advances from powerful men. Their survival depends on catching a murderer who appears to walk through walls and vanish without a trace — and the danger grows with each passing night.

The Mist-Torn Witches was published by Roc Books on May 7. It is 326 pages, priced at $7.99 for both the paperback and digital versions.