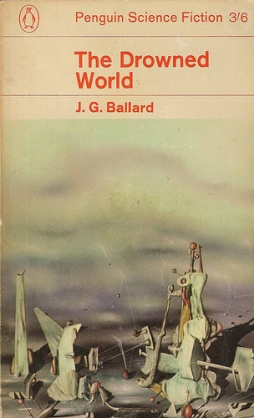 My copy of J.G. Ballard’s The Drowned World has an about-the-author section that describes the 1962 book as “a brilliant first novel that won him instant acclaim and had a dramatic effect on the state of science fiction.” Even allowing for the typically excessive claims of PR text, this is inaccurate: Ballard’s first novel was actually The Wind From Nowhere, published in 1961 and written in two weeks. Still, Ballard’s consistently downplayed and even disowned the earlier book, so let’s take him at his word. How does The Drowning World look fifty years on?

It has to be said that it’s one of those science fiction books that would seem at first glance to be strikingly relevant, if not prophetic — dealing with an idea become disturbingly significant in the years since the story’s first publication. In this case, the book’s set in a future sometime in a mid-21st-century suffering from extreme global warming due to a series of solar storms. The sea levels have risen; the world has drowned. The lead character has no memory of any civilisation we recognise, living with a few million other human beings in the polar latitudes. Reading this book on the heels of news that atmospheric carbon dioxide has passed the 400 parts per million threshold, it’s impossible not to feel a sharpening of one’s interest.

But, like much of the best science fiction, the core of the book is not the science but the fiction. Ballard uses his setting — a flooded tropical London claimed by iguanas and marmosets, totally lacking human life but for a visiting scientific and military expedition and one woman who grew up in the drowned city — to explore strange psychological effects of this particular future. It’s a kind of exploration of depth psychology, of dreams and a collective unconscious. Individual ontogeny is affected by global phylogeny; human identity is affected by a return of the climate and fauna of the Mesozoic era. The book becomes more fascinating as it goes on, increasingly moving away from the science of climate change and using the drowning of the world as a mirror for the submerging of rationality. It is, ultimately, truly concerned with apocalypse: not merely the erasure of the old world, but the making of the world into something new. 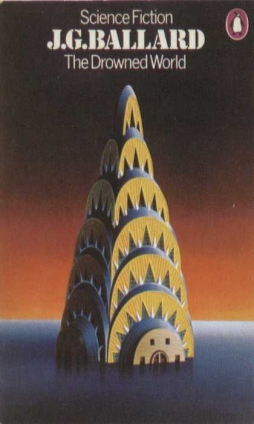 The novel follows a scientist hero, Kerans, who is studying the new life flourishing in European cities in the wake of the changes to the world. He’s working with an older man, Bodkin, and a group of soldiers; their home is Camp Byrd, Greenland, and extended time in the humid, overheated atmosphere of the south (as England has now become) is changing them. Many of the military men are having strange dreams, as is Bodkin. Kerans, Bodkin, and the last native Londoner, Beatrice Dahl, remain behind when the soldiers return to base; then a crew of scavenger-pirates arrive in the city, their captain, Strangman, intent on looting the art treasures deep below the surface — and secretly intent also on undoing the flooding of the city.

So much for plot. Even for a thin novel, not much happens, though the tight focus of the story (which never really moves beyond London, or shows the larger world) does go some distance to make up for that. It works due to its language; its style develops as it goes along, in parallel with the development of Kerans and his abandonment of strict rationality. It moves from a cold, even sterile directness and a set of direct infodumps to a kind of idiosyncratic and necessarily inhuman beauty. It becomes more obviously allusive, advancing several clusters of imagery: time, dreams, the sea as the subconscious, the sea as an amniotic haven to which one must return, the tension of apocalypse and Eden.

You can see some of that in this passage, about halfway through the book, when Kerans has donned a diving suit and explores a drowned planetarium:

Dimly illuminated by the small helmet lamp, the dark vault with its blurred walls cloaked with silt rose up above him like a huge velvet-upholstered womb in a surrealist nightmare. The black opaque water seemed to hang in solid vertical curtains, screening the dais in the centre of the auditorium as if hiding the ultimate sanctum of its depths. For some reason the womb-like image of the chamber was reinforced rather than diminished by the circular rows of seats, and Kerans heard the thudding in his ears uncertain whether he was listening to the dim subliminal requiem of his dreams.

To start with, you can’t help but note that the scene inverts a standard sf trope: here’s a man in a life-support suit with built-in helmet lamp, but rather than exploring outer space he’s at the bottom of the ocean, as though searching out the inner world. Moreover, he’s in a planetarium, a building originally intended to show the universe on Earth; here it’s become the venue for a demonstration of how strange and infinite Earth itself is. No longer a place for the exposition of science, it’s become a temple hiding an ‘ultimate sanctum.’ The public site has become a private place, cloaked in curtains. Not only is it a womb-like space, but the remnants of its former self enhance the resemblance. 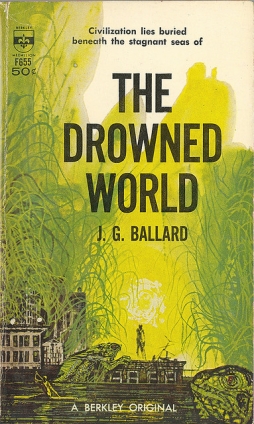 Kerans exploring the planetarium becomes a recession back into the womb, into the prenatal and indeed prelapsarian state. It is a step back through time, both personal (prenatal) and for humanity as a whole, a step into an unexpected Eden (thus prelapsarian, stepping back before the Fall). It’s sacred almost as an afterthought; it is sacred insofar as it is primal. The return of prehistory and prehuman times is played out in human consciousness: a human mind is the environment around it. We are linked to our times and our places.

The movement of the book, and of Kerans, is toward a greater if unconscious realisation of these truths. It’s about a man coming to understand his environment, but also, and probably more importantly, about that man throwing away the repressions and neuroses of an older way of life. “However varied his faults,” Kerans reflects near the beginning of the book, “in the past he had always believed them to be redressed by one outstanding virtue — a complete and objective awareness of the motives behind his actions.” That such an ‘awareness’ is an illusion is part of the book’s point. It’s probably significant that Kerans held this belief “in the past.” ‘Past’ here refers to his old life, before being changed by close exposure to what the world has become; already, by the time he has had this thought, he has become something different, doing things for reasons he cannot explain. He is no longer able to repress the actions he cannot understand.

So as the book goes on, Kerans’s motivations become stranger. Not wholly unknowable; the book is from his perspective, and much of what inspires him is his increasing awareness of the beauty of the drowned world. We see as he does, feverish with the beauty of the hot Earth. That pulls him to his own destruction — or what we presume to be his destruction. It might actually be his metamorphosis. Kerans speculates throughout the book that he is changing, or more precisely is in a rest-state before a great change. His final choices seem inevitable, a necessary emergence. His final fate is left uncertain: perhaps the changed world creates a changed kind of human. 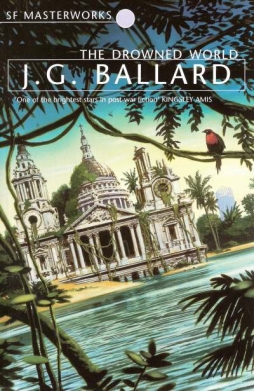 (Having recently read Jonathan Lethem’s Amnesia Moon, with its evocation of Philip K. Dick, I was struck by the way both books took apart not just the characters of their protagonists, but questioned the essential idea of ‘character’ itself. I wonder if this isn’t something that science fiction is uniquely qualified to do: calling into question the nature of the human, and what we think we know about ourselves. ‘Mainstream’ literature is largely defined by a certain conception of character and how character is to be dramatised; modernist and especially postmodern fiction, which question those conceptions, not infrequently makes use of science fictional notions. Beside Lethem and Ballard, consider Pynchon, or, say, Nabokov’s Ada. It might be that sf provides a uniquely useful tool for the investigation of the postmodern condition.)

As a science fiction writer, Ballard’s typically considered part of the New Wave; from that perspective, The Drowned World stands chronologically near the head of its tradition. It both is and is not like the science fiction before it: there is a sfnal novum, a changed world, a distinctive future described through thumbnail infodumps — but rather than seek to undo apocalypse, the scientist-hero surrenders to it. He becomes a part of the new world. As our own world changes, this may be uneasy consolation, if it is consolation at all: nothing Kerans experiences is easy. But the story is, in the end, one of hope. It is a reminder that what we think is fixed, and what we think must be fixed, will inevitably undergo a process of change. And that what will replace all the things we value may be, from another perspective, of as much or more value themselves.