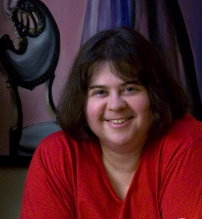 Niola, a young woman, and her grandmother have packed their meager belongings and are ready to leave their city of Menathis, for the evil army of the Varoh is nearly at the gates, and the entire city is emptying itself before the onslaught of the barbarians. At the last minute, however, Niola’s lame Gran decides she must seek the decaying temple of the goddess Rohatat and pray one last time to the goddess.

While Niola believes this a foolish waste of time, she nevertheless honors her promise to wait for her grandmother, not moving beyond the doorway of their cramped dwelling on one of the city streets. During the cold, lonely wait, a series of gods — wispy wraiths — appear one after the other to her, each presenting her with, in turn, a sword, a shield, and a spear, exhorting her to defend the city at all costs.

Vera Nazarian is a two-time Nebula Award Finalist and a member of Science Fiction and Fantasy Writers of America. She made her novelist debut with the critically acclaimed Dreams of the Compass Rose (set in the same ancient world universe as “Niola’s Last Stand”) in 2002, followed by epic fantasy Lords of Rainbow in 2003. Her recent work includes the 2008 Nebula Finalist novella, The Duke in His Castle, and Pride and Platypus: Mr. Darcy’s Dreadful Secret.

“Niola’s Last Stand” is a complete 7,000-word adventure fantasy tale. It is offered at no cost. Read the complete story here.