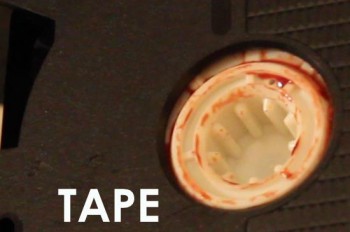 Jason Coffman wrote, directed, produced, and shot this thirteen-minute slow-burn nightmare. Jim Carston (played by Aaron Christensen) has a problem. He finds a business card for one Mr. Lake, who specializes in “Unusual Services.” Mr. Lake agrees to make Carston’s problem go away, but on one condition. After the job is completed, he will receive a videotape and, no matter what he does, he will have to possess that tape for the rest of his life.

Now, right off, it’s a little strange that a 2012 film should revolve around a videotape, but the medium is already so outdated that it has a strange nostalgic feel to it. And, as we see in the film’s surprising climax, there’s just things you can do with a tape that can’t be done with a disc.

This short film is already gathering critical acclaim and you can watch it now on Vimeo, as well as learn more about it at the Rabbit Room Productions website. And if you want to see more of the enigmatic businessman, Mr. Lake, there’s a sequel of sorts floating around the Internet titled, “Secret Cinema.”

Just be careful about picking up strange business cards.

Michael Penkas is the website editor for Black Gate. A collection of four of his stories, titled Dead Boys, is available for download through Amazon and Smashwords. You can learn more about his various publications on his blog.