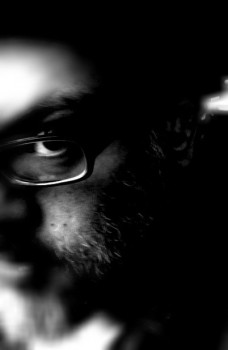 Todd Robinson, also known as Big Daddy Thug, is similar to Pat Benatar in one essential way – he hits you with his best shot. His debut novel, The Hard Bounce, is a fast-paced, heart-pounder of a gritty mystery. Unlike Benatar, who shoulder shimmied her way out of knife fights, Robinson looks like he could punch a knife out of your hand, catch it mid-air, and fling it past your ear as a warning without breaking a sweat. He’s broad, bearded, often in black – and thank the literary gods – a peaceable author, too busy writing to get in many fights.

Robinson is the Chief Editor of ThugLit, a crime journal dedicated to “writing about wrongs.” His novel, The Hard Bounce, came out in January. It focuses on Boo and Junior, two regular guys who are bouncers at a Boston punk rock bar. Their security company, 4DC (Dirty Deeds Done Dirt Cheap), is hired to find a missing girl. What begins as an easy job quickly spirals out of control.

Robinson kindly took time out of his editing and writing to speak a piece to Black Gate.

Black Gate: Where did the idea for The Hard Bounce come from?

Todd Robinson: Many years ago, I worked at a legendary rock club in Boston called The Rathskeller that would throw all-ages punk shows on Sunday afternoons. One afternoon, this young girl in pink dreads caught my eye. I remembered her, because I marveled at the courage of that kid—to do her own thing at an age when most kids try anything to “fit in”. A few hours later, her father showed up at the bar looking for her. I guess she broke curfew. He had a picture of her that showed a clean-cut kid, not the dreadlocked individualist I’d seen only a few hours later. Three things stuck with me from that incident. The first was that I never found out what happened from that point. The second was: what turned that kid from the one in the picture to the one I saw? The third was: were I suddenly put in a position to find that kid, how would I go about it?

The Hard Bounce is set in Boston. Do you think this story could have been told anywhere else?

I don’t know. I live in New York now, and I know that the same story couldn’t happen here the way it did in Boston. I’m not even sure that it could unfold the way it does in today’s Boston. I more or less dropped the story into the old Boston that I knew and loved—that really isn’t there anymore. It’s a love letter to a particular time and place in my life.

Is The Hard Bounce a standalone novel or can we expect to see more of Boo and Junior?

As of right now, it’s a standalone simply because I only have a one book contract. Hell, right now my “career” is a standalone. However, I always planned out the stories of Boo & Junior as a series, and am working on #2 right now.

How do you want to leave your readers feeling? 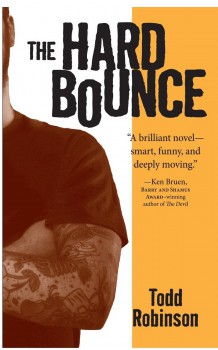 Less like they’ve been on a wild ride, but that they’ve shared a particularly rough and tumble episode in a person’s life. That’s what I want the entire series to feel like. I want the reader to experience moments within the characters’ lives more than skipping through individual episodes. I want there to be repercussions in book 4 from book 1.

Have you ever been called to write in a genre outside of noir or mystery?

Matter of fact, I was working on a horror novel when the call came in on The Hard Bounce. Frankly, I’d given up on it. I wrote one horror short story, and then adapted it into a screenplay. That screenplay made it very far in the Nicholls Fellowship competition, so I thought I should try my hand at horror on a larger scale.

You are the creator and Chief Editor of ThugLit. What has editing others taught you about your own writing?

Man, nothing has taught me more about the flaws in my own writing than nitpicking the work of others. It’s an epiphany when you find something that you absolutely hate in someone else’s work—and then realize that you do the exact same thing.

Recently on The Daily Beast, Frank Bill asked, “Is Masculine Writing Dead?” He laments the loss of physical labor and ruggedness represented in contemporary fiction. Do you agree with this? Do you feel yourself to be a “masculine” writer?

Beyond him being one hell of a writer, I consider Frank Bill a friend, so I’m not going to go into detail on the piece (since the Internet has already praised to high heaven AND torn it a new butthole). So, without sounding judgmental or getting political and avoiding the question, I’ll just say this about the piece: I agree with a lot of the sentiment within the opinion, but I don’t necessarily agree with Frankie’s narrow definition of masculinity.

I do consider myself to be a writer of masculine fiction, which is why I’m a little surprised at the incredibly positive response that The Hard Bounce has been getting from female readers. Just goes to show you how much I know about women. (Sighs)

What are several classic crime novels or short stories that everyone should read?

John D. MacDonald’s Travis McGee series is a must. They were just re-issued. Start with The Deep Blue Good-by. He created the classic template for the modern American crime series. Then read The Friends of Eddie Coyle by George Higgins. It’s THE classic Boston crime novel. More people need to read it. I’m amazed at how little known it is outside of the hardcore fans.

I already mentioned Frank Bill, so let’s add Josh Stallings, Matt McBride, Johnny Shaw, Chris Holm, to name the most recent that I’ve read. Two guys to watch out for are Joe Clifford, Justin Porter, and Jordan Harper. All of these guys absolutely kill it on the short-story scene and have in-the-works novels that I’m really looking forward to reading.

The Hard Bounce is chock full of music references. Is music important to your creative process? 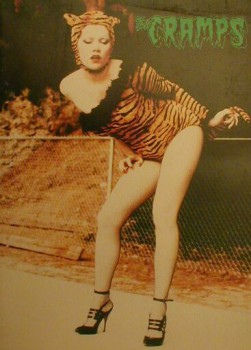 It is. I like setting a musical tone to write to, to help set a scene in my head emotionally. For the longest time, I couldn’t listen to anything with a lyric. I was such a bad typist any external words would f— up my own. I did most of my writing to jazz and opera—opera not counting, since I couldn’t understand what the hell they were saying.

What albums are always on your rotation?

Anything by Social Distortion, Clutch, The Cramps, and Tom Waits. Those are my big four. Lately I’ve been listening to a lot of Black Keys, Mumford & Sons, and Florence and the Machine. I know that’s all over the place, but it’s what I dig.

It took 10 years, 5 agents, 4 publishers, and 37 drafts to get The Hard Bounce out…how’s the timeline looking for your next novel?

What does success mean to you? How do you know when you’ve “made it”?

I pay my bills with bartending. Every once in a while, somebody comes in and asks, “Hey! How goes the writing?” My answer is always the same. It’s, “I’m still on this side of the bar, ain’t I? You’ll know it’s going well by either my absence or when I’m sitting at the bar next to you.”

Bonus Round…So You Mentioned You Were Writing a Horror Novel…

Did you actually think you could get away with mentioning you were writing a horror novel without telling us what it is about? :: nudge:: WHAT IS IT ABOUT? Do tell. Please. It excites us.

Gonna pull a rare one here and be coy… A couple of friends that I’ve discussed the novel with have told me to keep the concept close to the vest. All I’ll say is that it’s some daaaaaark stuff—at times hard-to-write dark stuff. Or maybe I’m just a wuss. All I’ll say is that it involves some creatures that go Bump in The Night that don’t f—ing sparkle and a ghost that may or may not be Lizzie Borden.

How long have you been a horror fan? What was your entry point into the genre?

Been a horror fan longer than any other genre. Like most, Stephen King was a huge influence on the writing end. My mother’s friend thought it a good idea to give me Night Shift when  I was 12. Been a fan of horror films even longer. The first two film scripts I wrote are horror.

What is the worst horror movie that you’ve ever seen?

The American Godzilla. It’s the worst film ever made. Followed closely by Alien vs. Predator.

What about the worst horror movie that you’ve ever seen and still enjoyed? Re: So bad it’s good…

I’m still a huuuuuge kaiju fan. I’ve got all of the Man In Suit movies on DVD. 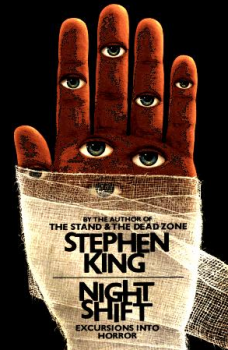 That’s a tough question. The last two to scare the crap out of me were the two REC films (ignore the third) and The Orphanage. All three are Spanish and brilliantly executed. I’d count Cabin in the Woods in there if it wasn’t so damned funny. CitW is genius.

What about the last horror novel that you read that you were like, “WHY DIDN’T I WRITE THIS?”

Great horror novelists have a skill-set that always blows me away and leaves me humbled. A skill-set that I wonder whether or not I have. Time will tell.

What horror writers inspire you?

The big K’s. Jack Ketchum. Dean Koontz. Stephen King is still the boss. Haven’t dug into any Joe Hill yet, but plan on it soon. I hear he’s good.

What are the differences (or are there any?) when you are writing horror vs. mystery?

For me, many of the elements are intact between the two. My short story (and screenplay) Car Number 20 on the Southern Belle Line is essentially a mystery where the answers are supernatural. The script was a semi-finalist for the Nicholls Fellowship, but hasn’t been picked up yet (ahem…you hearing this Hollywood?).

Lastly…you are sitting in the living room, sipping an adult beverage, when you hear a thumping, chittering noise come from the basement. The lights go out. Lightning flashes. There is a scream from below. Do you, Todd Robinson, go into the basement to see what’s going on?

Abso-freakin-lutely. I grab my brass knuckles and leap right in.

At which point I get immediately eaten.