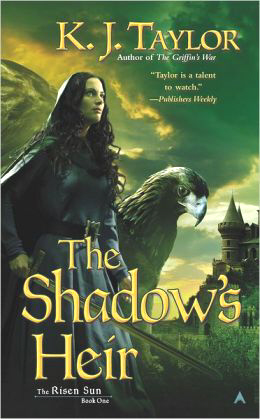 There are so many fantasy series crowding the shelves these days that’s it’s hard to know where to spend your hard-earned book dollars.

Here at Black Gate we’re hopeless fans of the fantasy series, but even we can’t cover them all. But at least we can alert you when a promising new one appears, so you can get in on the ground floor. Thus here we are, banging the drums for The Shadow’s Heir, the first novel in The Risen Sun trilogy by K.J. Taylor:

Laela Redguard was born with the black hair of the Northern kingdom and the blue eyes of the Southern people, forever marking her as a hated half-breed child of both. When her only family tie is severed, the fierce and strong-willed Laela decides to leave her adoptive father’s home in the hopes of finding acceptance in the North, where the ruthless King Arenadd and the dark griffin Skandar rule.

While Laela’s Northern features allow her to blend into the crowds of the King’s seat at Malvern, she cannot avoid falling victim to a pair of common thugs. When a stranger saves her life and gives her a place to stay, Laela is shocked to learn he is Arenadd himself — a man said to be a murderer who sold his soul to the Night God — the King without a heart.

Arenadd is unsure what compels him to help this girl, but there is something about her that seems familiar, something he cannot remember — something that may rise up to banish the darkness forever…

K.J. Tayor is the author of The Fallen Moon trilogy and The Land of Bad Fantasy. The second volume of the Risen Sun, The Shadowed Throne, is currently available in Australia, with an American edition scheduled for January 2014. Her website is here.

The Shadow’s Heir was published December 24, 2012 by Ace books. It is 351 pages in paperback, priced at $7.99 for both the paperback and digital editions.