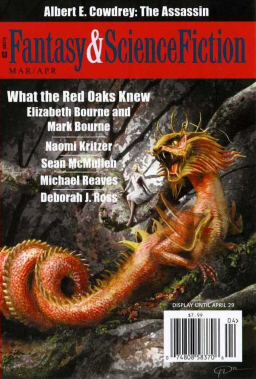 Holy cats, the latest issue of F&SF has been out for two weeks, and we haven’t covered it yet. I’m asleep at the switch. It’s only the most important fantasy magazine, period. I’ll complete this post, and then submit myself for ritual flogging.

Let’s see what Chuck Rothman at Tangent Online thinks of this issue. Unlike us, he got his review in on time:

“Solidarity” is a bit of dystopian fiction, set in the Seastead, a group of ships that have been turned into a floating city, where anything goes. Beck is the daughter of an important official and has been kicked out and has been cut off by him. She tries to scramble around in a place where nothing is free in the name of freedom and stumbles upon a potential political plot. Beck is a great character and Naomi Kritzer portrays a chillingly realistic society… This is primarily an adventure, but the well-thought-out setting makes it an excellent read…

Andy is “The Assassin” in a story by F&SF regular Albert E. Cowdrey. He failed once when his target turned out to be a hologram and is going back to finish the job… The story follows Andy’s life and how it intertwines with Faith as he makes it through a hellhole prison to a form of happiness. The story never stops being fascinating and the characters — even the ones who might be clichés — never stop being surprising.

We last covered F&SF here with the Jan/Feb issue.

Now *please* sell it as epub or PDF or some other electronic format besides the kindle so i can read it on my Sony PRS.

Yeah, I understand your frustration. But it was quite a coup for Amazon to get F&SF on an exclusive basis for the Kindle, and I’m certain they paid a premium for the privilege.

It made good business sense for F&SF — that exclusive deal helps fund the magazine — but I know it’s frustrating for non-Kindle users. Is there a Kindle app for your Sony device?

No, but for my acer a500 one does exist. However, reading whole books on what’s basically a tft is torture compared to an e-ink display.
*sigh* oh well, i already broke down and went with the dead tree edition of 2000ad, might as well do it with F&Sf, too.
Just don’t go exclusive with a closed eco system with blackgate too, please.

Chet Arthur is a pseudonym of Albert E. Cowdrey, thus he has two stories in this issue of F&SF. He uses it to pen a totally different type of fiction from his “Cowdrey” stories.

Wow — I thought Cowdrey was prolific BEFORE I knew about his pseudonym.

Does he have any collections in the works?

John, I don’t know if he has any collections in the works, but I wouldn’t be at all surprised if he did. He certainly has enough stories to fill a handful.

Has the slow death of the short fiction markets affected the appearance of collections, you think? Night Shade and Golden Gryphon used to do some fine collections, and they’ve both recently perished.

A decade ago, someone with Cowdrey’s productivity would have had at least one or two collections by now, I would think.

[…] the latest F&SF. Especially when you consider recent covers have featured deadly sea creatures, dragons, and floating eyeballs. But hey – magical cats are a time-honored tradition in American fantasy, […]