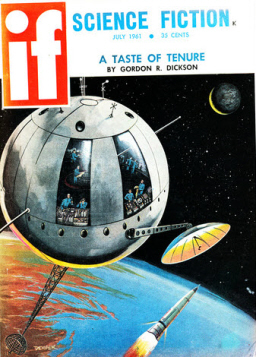 I’ll get back to Cele Goldsmith’s magazines soon enough, but I happened to grab this issue of If, so it’s up next. This issue comes from very late in H. L. Gold’s official tenure as editor – Frederik Pohl became editor (officially) with the first issue of 1962. (I believe it’s generally regarded that Pohl was editor in all but name for some time prior.) During this period, the cover and spine read only If Science Fiction, though the title page still had “Worlds of” ambiguously placed, so that one could read it either If: Worlds of Science Fiction or Worlds of If Science Fiction.

The cover is by Dember, called “Operation Overlook,” not illustrating any story. (It’s a depiction of a manned satellite orbiting Earth, apparently watching for rocket launches and the like.) Interiors were by Wood, Larry Ivie, and West, and someone unidentified in one case. (Sometimes the illustrator was credited, sometimes I could read the signature, and in one case there was no signature and no credit.) There’s also a page called IFun, with two single panel comics, by Wagner.

Advertisements include the ubiquitous Rosicruans, U. S. Savings Bonds, and some in-house ads. Other features include Science Briefs, a puzzle, and a brief article about the Wendigo, by Theodore Sturgeon (on the masthead as “Feature Editor.”) There is also an attempt to start (restart?) a letter column, to be called Hue and Cry, though this single page only briefly quotes a letter from one Lawrence Crilly, requesting a lettercol. 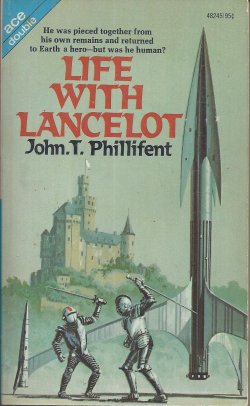 Jim Harmon wrote one outstanding SF story (“The Place Where Chicago Was”) and some other good stuff among a few dozen stories he published from 1954-1967. But he became best known as a radio historian. The story this issue is pretty weak, however. Three explorers come to a planetoid inhabited by creatures who seem to die with no provocation. But the bodies are gone the next day. One of the men has a problem of his own – he can’t sleep, ever – and this strange behavior causes the others to accuse him of tampering with the dead creatures… until they discover the real secret. The science is rather silly, and the resolution kind of weak, and the attempt at serious psychological exploration of the main character’s mental problems is not convincing at all.

John Rackham’s “The Stainless-Steel Knight” concerns a rather stupid spaceship technician who happens to encounter advanced aliens and gets some super powers and an alien companion as a result. He ends up on a planet where each continent attempts to maintain a historical culture. For this story, he is in a quasi-Medieval setting and he has to vanquish a “dragon,” which he does with the considerable help of the alien. Really quite silly stuff – intended to be so of course, but to my mind not successfully.

About a decade later, one of the very last Ace Doubles featured the novel Life With Lancelot, by John T. Phillifent (“Rackham’s” real name, which he normally only used for his Analog stories – his co-author on that Ace Double, William Barton, thinks that the Phillifent byline was a mistake by Ace for this book). Life With Lancelot added two more stories, even sillier, one for each of the other historical cultures on this planet.

“A Taste of Tenure,” by Gordon R. Dickson, is a deadly serious story in the way Dickson could be at times. It’s set in a Galaxy-ish future (at this time, If seemed to me very much a lesser variant of its companion magazine – that would soon change) in which jobs are held onto tightly, especially once one gains tenure. The hero gets a promotion, but unfortunately he will have to take on the aging secretary of the previous occupant of his job – and he also doesn’t want to fire his own secretary.

Meantime, his wife wants to buy an expensive country place, which depends on his continued advancement. He is tempted to violate his strict sense of ethics in dealing with this problem … I felt the whole way that Dickson was simply trying too hard, and I was never convinced by the characters or by the social situation. 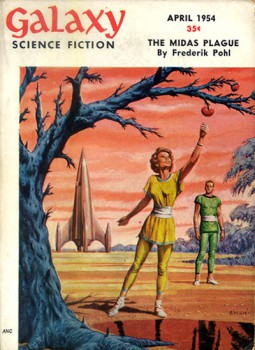 “The Junkmakers” by Albert Teichner strongly echoes Pohl’s “The Midas Plague.” People live in a time of plenty – too much plenty. So every so often, on the High Holy Day, they “sacrifice” all their goods. Then there is work for a few years making new stuff – after which the sacrifice must come again.

The idea of using the plenty to live lives of leisure and contemplation is regarded as treasonous. The hero begins to doubt his society and soon is drawn to the frowned-upon study of history, and then into a resistance group. In many particulars, it resembles the only other Teichner story I have read: “Cerebrum,” from the January 1963 Amazing.

William W. Stuart’s “The Real Hard Sell” is another Galaxy-ish story, set in a future where robots do almost everything. The only jobs for humans are in sales – “only a human can sell.” The hero is a top salesman who is feeling uncomfortable in his life and uneasy about how he’s bringing up his child, despite his success and his beautiful wife. In this story, he originates a clever sales strategy for a new automated house, but his discomfort remains… leading to a couple of slight ending twists. Very minor work this, though not bad in its way.

Stuart is this issue’s Little Known Writer – he published 9 stories in the field, all between 1960 and 1962, mostly for Galaxy and If (the other two for Cele Goldsmith).

And the other story is J. T. McIntosh’s “Doormat World.” This is minor McIntosh, set in a future in which all the vigorous types have left Earth for colony worlds, leaving Earth to milquetoasts. So when a man comes to the town of Winsafton from the colonies and starts taking stuff from people, graduating to raping their women, etc., nobody resists, until one of their own who had left for the colonies years before comes back for a visit. As with a lot of McIntosh, it’s quite overtly engineered to make a single point (a technique he acknowledged as one of his methods) – in this case the point it makes just isn’t that interesting, though I will say the resolution is quite nicely and plausibly (and somewhat darkly) handled.

Taken as a whole, this issue, as I hinted before, really reads like a downmarket companion of Galaxy – the stories are very much in the Galaxy mode, but never as good (as Galaxy‘s best – of course, that magazine published plenty of dross as well.) Pohl would eventually take If in a somewhat different direction , making it more of a fun-oriented, somewhat younger-slanted, alternative to Galaxy – a much more successful strategy (as evidenced by If‘s Best Magazine Hugos).

We last covered If magazine with the October 1957 issue.

Rich Horton’s last retro-review for us was the August 1964 issue of Amazing Stories.

[…] and C. M. Kornbluth. Rich Horton, who has been examining vintage SF digests for us, recently reviewed the July 1961 issue of IF, in which Pohl officially became […]