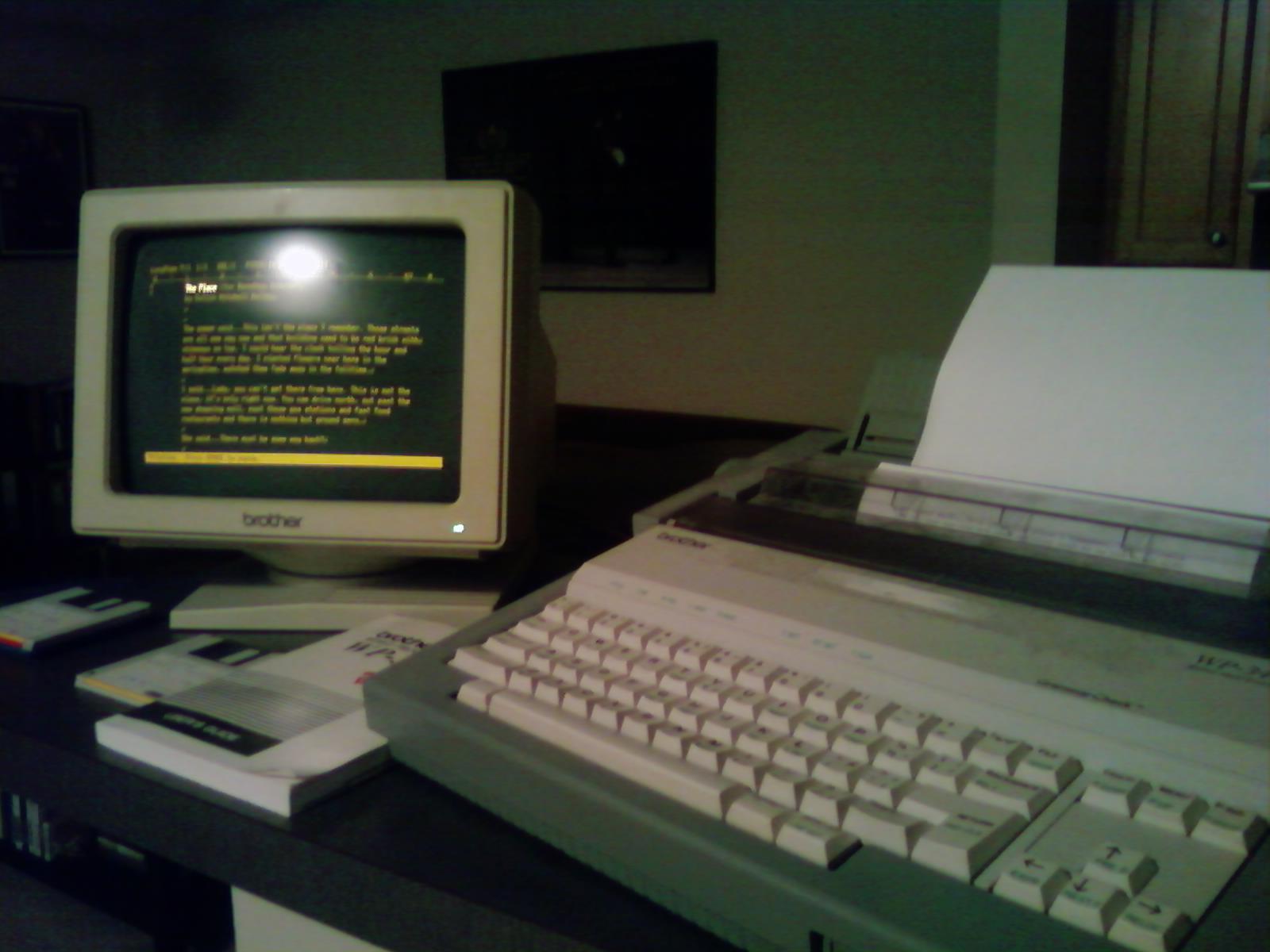 I got onto the World Wide Web relatively late in the game. Prior to 1999, I was still pounding away on a Brother word processor. It could play Tetris (all the shapes were a single color, orange, against a black screen). Connect to the Web it could not.

Then I got my first computer, modem, and dial-up service — just in time to enjoy the Y2K panic when we collectively feared our computers would crash and wipe out all our precious data as a special New Year’s Day surprise. That never came to pass; in fact, I still have a few old files from that floppy-disc-devouring dinosaur, dutifully transferred from one upgrade to another down the years. Though if I open them now, converting them from an ancient version of Wordperfect to Word 2007, the original text appears far down the page, embedded within dozens of lines of incoherent symbols, as if a foreword and postscript had been attached to my musings by an alien intelligence in an unknown tongue.

Most of us can probably recall what it was like when we first discovered the new vistas that were suddenly opened to us…The novelty of typing anything into a search engine and marveling at the thousands of possibilities that came cascading in response to our command. Text, visuals, audio, video — why, images moved and made noises on the virtual page before us! We were transformed into wizards, able to summon erudite knowledge or time-killing trifles (far too often the latter) with such ease that Prospero himself would be envious, and indeed might be tempted to trade in Ariel for a Dell.

Then we really started having some fun flexing our newfound powers (and no, I don’t mean discovering naughty sites — but okay, let’s admit it, most of us did that too. Hey, I’ve read the statistics — nearly all of us did that! Including most of us who claimed we didn’t. Data doesn’t lie.). There were addictive games…engaging chatrooms…funny pictures (mostly of cats, for some reason). But occasionally we did utilize these new tools to do some bona fide research.

And that brings me to one of my very first forays onto the Web on a fact-gathering mission. This was on Ask Jeeves or one of those other old pre-Google-domination search engines. I was hunting down trolls. I mean old school trolls, the scary, rock-biting trolls of Scandinavian myth and folklore. These kinds of trolls: 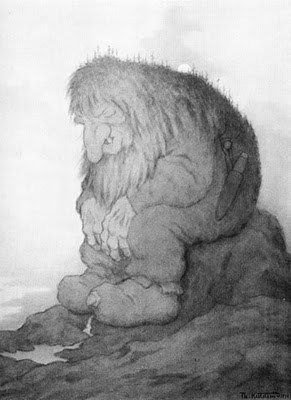 Of course, thousands of pages popped up in answer to my query, linking to virtually every iteration of troll across the World Wide Web….

I was about to learn just how damned easy it can be to get sidetracked on the information highway.

While scouring through all this information on trolls — those fearsome creatures that haunt Scandinavian woods and rocky bluffs — I came across a site called Trollforest. Sounded promising, until I discovered they sold plush troll dolls, like this… 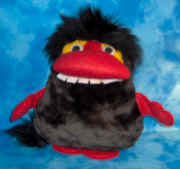 This one is “Bugbear”, who, according to the site, is a “wild and friendly troll” that “likes to have a good time all the time” (like the keyboardist in This is Spinal Tap?).  They had a comic strip about him posted on the site, in which he is sitting up in a tree dozing. Someone off-panel yells, “WHAT do you think you are doing?” He snaps awake and replies, “I’m meditating. It keeps me cute and cuddly.”

You could even write e-mails to the various troll characters and get a response. So I wrote to Bugbear (not as myself, but as a hypothetical child):

Hi Bugbear, I saw your comic and I thought you were cute and cuddly but my mom said you would eat me. she says its in your nature because yuor a troll. is that true?

The very next day, Bugbear wrote me back! There it was in my Inbox, an actual email from Bugbear:

Hi there! Thank you for your e-mail. I’m glad you think I’m cute and cuddly. You can tell your mom it is not in the nature of Bugbears to eat people. We never have. In fact, nobody here in Trolldom would do such a thing. We are friendly Trolls, you know. As far as eating goes, I like to eat! Yessir I do! I like to eat hamburgers and spaghetti and tomato sandwiches and stuff, and apples and grapes and brownies of course… and now I’m so hungry I’ll go and make myself a ham and tomato sandwich! Anyway, I hope you have a great day!

As innocent as this reply may sound, there is a hidden message here, if you can read between the lines (and if you have far too much time on your hands, as I apparently did back in 2000). It is found in our friend’s statement of what he likes to eat: “and brownies of course…”

According to An Encyclopedia of Fairies by Katharine Briggs, brownies are “one of the fairy types,” described as “small men, about three feet in height, very raggedly dressed in brown clothes, with brown faces and shaggy heads, who come out at night and do the work that has been left undone by the servants” (45).

Now I ask you, if Bugbear will eagerly devour these friendly fairies, why should we expect him to stop at human children?

If you want to check out these trolls-in-Beanie-Babies’-clothing, visit www.trollforest.com. But if you do buy one for your child, don’t be too surprised if you come into his/her room one morning to discover your child missing…and a troll that has grown larger in size.

In the years since, I have had exchanges with other trolls on the Net, but none that were nearly so nice as that first troll.

In preparing this post, I revisited the Trollforest site. Thirteen years later, it is still active; indeed, the company (Fauni), which is a family-owned business from Finland that has been making troll dolls since 1952, appears to be going strong. The site itself is quite fun to peruse, especially the section on the company’s history, which includes archival photos of their mid-century trolls posed in various troll villages.

All kidding aside, I now have two (actual, not hypothetical) children of my own. And I am giving serious consideration to ordering a plush troll or two for them (only fair, I suppose, since I derived some humor over a decade ago poking fun at Bugbear).

The image of the Brother word processor is from Collin Kelley’s blog. He has an interesting post on the challenges of converting old floppy-disc files here.