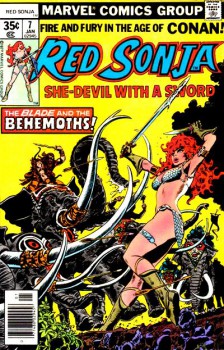 Remember when Red Sonja killed that king way back in Savage Sword of Conan 1? People are still giving her crap about it. Honestly, that must have been twenty issues ago, at least. I’m sure that the statute of limitations in the Hyborian Age was something like six months for regicide; but people still bring it up.

But first, this story begins with Sonja trying to cross a rope bridge. A frayed rope, rotten wood-plank bridge. She decides that the risk of the bridge snapping is outweighed by her need to sleep indoors that night, so she braves it. And she’s doing fine, stepping lightly. Folks make fun of her chain mail bikini, but I’m sure a woman in full-body plating would have fallen through the rotten panels of that bridge. So Sonja’s choice of armor actually saves her life this time. The bridge is more than able to bear the weight of Sonja, her bikini, and her sword.

Because, really, how much could a horse weigh? (900 pounds on the light side … thanks, Yahoo) So Red Sonja, when presented with the option of placing one-hundred pounds of weight or one-thousand pounds of weight on a rickety bridge, chooses the latter because … I honestly don’t know.

Well, surprising no one (least of all, the horse), the bridge falls apart just as she’s about to set foot on the other side. Sonja manages to grasp on to a rocky ledge. Sonja’s horse, on the other hand, goes the way of so many horses before it. Really, how many horses has she lost since her first appearance? Despite her vow, it’s actually safer to flirt with Sonja than to be her horse.

And I just remembered that she did fall in love with a horse already, back in Red Sonja 1, so the joke I was planning to tell has been told. And that is one of the reasons I love this character: no matter how absurd a situation I can imagine her in, chances are she’s already done it.

Back to the cliff: Red Sonja is clinging for dear life on a stone outcropping, reaching for an exposed root. The root is just out of her reach at first, but then it slowly stretches itself down to meet her. Too desperate to question it, she climbs the root and doesn’t even get a single panel to catch her breath before she’s nearly trampled by a mammoth. A mammoth being ridden by an idiot.

Seriously, for this series of events to work, the mammoth must have been heading for the rope bridge. Which means that whoever is riding it must have thought that any rope bridge (much less a rotted one) could hold a fully-grown mammoth. How much does a mammoth even weigh? (six tons on the light side … thanks again, Yahoo)

So Red Sonja does what any rational woman in a bikini would do in this situation. She asks him for a ride into town.

But our mammoth-riding moron refuses to give Sonja a ride until she defeats him in combat, which is a rather extreme method of dealing with hitchhikers, to say the least. As they fight, he tells her that his name is Oryx of Skranos, because people in comic books like to start conversations while they’re fighting. Five panels later, Oryx is on the ground, with Sonja’s sword at his throat. She agrees not to kill him in exchange for a ride on the mammoth. Because Red Sonja is all about the new experiences and who wouldn’t love to go for a mammoth ride?

It turns out that Oryx lives in a fort. A fort built by his dad. Which kind of makes him a big deal in this place. He even shows her the reinforced pen in the heart of the fort where the mammoths of kept. Those reinforced walls are the strongest part of the fort. So there’s absolutely no way that the mammoths could break through them.

For three whole panels of story.

Red Sonja’s never herded wild mammoths before, but you wouldn’t know it. She orders two men to pull a hay wagon in the path of the stampede, then she lights the hay on fire and the giant torch causes the mammoths to turn around and stampede right back into the pen. Where they’re sealed back in.

Apparently, the mammoths didn’t break down the walls of their pen. Someone just forgot to lock the gate. Ah well, it happens. Not the sort of thing you’d execute someone for doing.

After proving herself during a mammoth stampede, everyone in the fort loves Red Sonja and she is quickly escorted to the nearest tavern. She starts drinking with Oryx immediately, relaxing into a conversation about, among other things, that king she killed a few months back (I didn’t forget about the first paragraph). And it’s basically, “Oh yeah, I killed him, but he had it coming.”

So Oryx hatches a plan to capture the She-Devil with a Sword and turn her in for the reward money (assuming there’s still a reward and that his brothers haven’t just moved on with their lives). Meanwhile, Red Sonja has gotten truly plastered and has begun dancing with whoever will take her in his arms. Remember way back in Conan the Barbarian 24 … Red Sonja likes dancing in taverns.

Eventually, she closes the place. It’s just her and one other man, a mysterious stranger who isn’t really mysterious because we’ve already been told his name is Suumaro, the outcast brother of Oryx. Why is he an outcast? Because in sword & sorcery, brothers never get along. One of them is always evil. And since Oryx is setting up to betray our hero, that would automatically make Suumaro good (more on that in later issues).

He warns Sonja that her life is in danger and that the two of them should flee the fort immediately. And she agrees with him because, near as I can tell, Red Sonja actually gets smarter when she’s drunk. But it’s already too late. As they leave the tavern, she notices bowmen standing on the surrounding walls, all aiming their arrows at her. She urges Suumaro to duck back into the tavern and save himself.

Alone, surrounded by twenty bowmen, armed with nothing but a tankard of ale, Red Sonja reminds us all why she is the first lady of fantasy. She spends two pages trash-talking the archers and Oryx. She dares the archers to shoot her. And then Oryx decides that he can’t give the order to shoot an unarmed woman.

He decides to hang her instead.

The story ends with Red Sonja standing on the gallows, being fitted for a noose, while the crowd around her screams for her death. A few of the men in that crowd probably danced with her hours earlier, stood by her when the mammoths had to be corralled; but now it’s all “What have you done for me lately?” Typical genre villager mentality.

And all she wanted to do was cross a bridge.

Next Week: “I’ll Teach Red Sonja About a Woman’s Rightful Place,” Said the Deadest Man Ever.