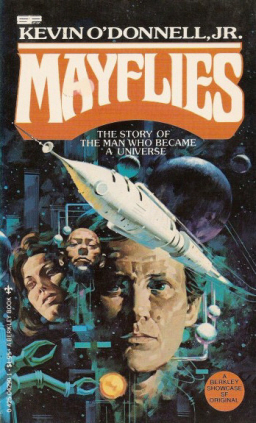 American science fiction writer Kevin O’Donnell Jr., who added “Jr.” to his byline to distinguish himself from his famous father Kevin O’Donnell, director of the Peace Corps, died this week.

O’Donnell graduated Yale University in 1972; his first short story “The Hand Is Quicker” appeared a year later in Analog. He published more than 70 short stories in a variety of genre publications, including Galaxy, Galileo, Isaac Asimov’s Science Fiction Magazine, Amazing/Fantastic, and Omni.

His first novel, Bander Snatch, appeared in paperback from Bantam Books in 1979. He published a total of ten over the next eleven years, including Mayflies (Berkley, 1979), War of Omission (Bantam, 1982), and ORA:CLE (Berkley, 1984).

Most of O’Donnell’s fiction was standalone, with the notable exception of his four-book series The Journeys of McGill Feighan for Berkley Books: Caverns (April 1981), Reefs (October 1981), Lava (April 1982), and Cliffs (February 1986).

His last novel was Fire on the Border from Roc Books, published in September 1990; he retired from writing fiction after his last short story, “The Boys from Bethlehem” (written with Denise Lee) appeared in the anthology The Darkness and the Fire in August, 1998.

O’Donnell was very active in the Science Fiction Writers of America, serving as chairman of the Nebula Award Novel Jury in 1990 and 1991, and chairing the Nebula Award Committee 1990-1998. He was the Business Manager of the quarterly SFWA Bulletin from 1994-1998, and in April 2005 he received the Service to SFWA Award.

Always sad to see an obituary on Black Gate, but from the looks of it, O’Donnell Jr.’s were some good reads. Time for another trip to the library.

I know exactly what you mean.

I own that copy of Mayflies, but I don’t have any of his McGill Feighan books, and that’s obviously a collecting oversight.

[…] Kevin O’Donnell, past chairman of the Nebula Award Novel Jury and 2005 Service Award winner, who passed away in […]

[…] now named the Kevin O’Donnell Jr. Service to SFWA Award, in honor of Kevin O’Donnell, who passed away last year — for his tireless work with the Grievance […]