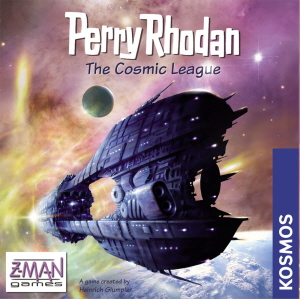 I’m willing to bet most of you have no idea who Perry Rhodan is.

Believe it or not, Perry Rhodan is the most ambitious future history ever written. Since its creation in 1961, over 3,000 Perry Rhodan novels have been published; the series has been translated into half a dozen languages and spawned at least one movie and a popular computer game, The Immortals of Terra.

Why haven’t you heard of him? Probably because the last English-language Perry Rhodan novel, #118 The Shadows Attack, was published by Ace Books in 1977. The English-language version was the brainchild of Forrest J. Ackerman, who hired his wife Wendy to do most of the translations. The series has continued in its native Germany, where it is published weekly.

I bring all this up because A) Perry Rhodan practically introduced me to science fiction, at the tender age of eleven, and B) I recently purchased Perry Rhodan: The Cosmic League, a two-player card game from Z-Man games that makes use of the Perry Rhodan license in a fast-paced game of interstellar trading and politics:

A newly colonized star system, populated by different peoples… Mysterious remains of age-old technology… Orbital stations to organize the trade between the worlds… and you and your spaceship right in the middle of it all…

Discover the Ambourella system with all its opportunities. Fight the adversities of gravity and do business with the planets. Your are the captain of a spaceship transporting goods and passengers. Invest your earnings early in valuable technologies and thus strive to become the most wealthy merchant of the Cosmic League.

Perry Rhodan doesn’t actually appear in the game, but it does draw on the rich backdrop of the Cosmic League. It comes with 60 technology and interventions cards, 6 planet tokens, 30 different cargo cards, and 2 spaceships. The average playing time is under half an hour. It’s a fairly simple game at heart, and the tie-in with Perry Rhodan is fairly light, but nonetheless it brought back a lot of great memories of 1970s pulp science fiction.

Perry Rhodan: The Cosmic League was published by Z-Man Games in 2007. It retails for $24.99, but I bought my copy new online for around 10 bucks.

I love seeing you guys do board game reviews. Even for games that have been out for awhile like this one.

Thanks Glenn! I don’t get as much time to play them as I want to.

And really, Black Gate is all about shining a light on neglected fantasy. Even if it is a board game from five years ago. 🙂

Perry Rhodan is a national phenomenon. Although still regarded as pulp of low quality in the common opinion, i have found a lot avid fans across the whole educational spectrum, male and female. Sometimes its even a family thing: both a good buddy of mine as well as my ex project lead inherited the start of their collection (either the original magazines(several hundred) or the collections(60 something)) from their fathers and just kept on reading.

I myself read through the first 40 collections, and its fascinating how the style and the content mirror the political and cultural climate each was written in. And its pretty good SciFi too 🙂

And please, don’t watch the movie. Its terrible. So terrible its terrible again.

Thanks for the snapshot on Perry Rhodan! Do you live in Germany?

Yes, i am a german native.

While we are on the subject of german pulps, there are few other noteworthy ones.
First, there was “Der Hexer von Salem”, which did its best to create a continuous story line involving someone on the run from creatures from Lovecraft’s Cuthulhu mythos. Loved those as a kid.
Then there is “Geisterjäger (Ghost hunter) John Sinclair”, which has passed its 1800th issues. You can see the covers here: http://www.coverbrowser.com/covers/john-sinclair
Basically , what you see on the cover is what you get, although there are some overarching story lines. Cheesy is probably a good description. There were also a few games produced, all of them way below average. Read only two or three, but my girlfriend swears by ’em.

What germany unfortunately lacks are magazines for short fiction fantasy or SciFi (like Analog, Black Gate :-), Black Static,…), especially if you want them as epubs or PDF.

We started early http://en.wikipedia.org/wiki/Der_Orchideengarten
but during Adolf’s reign of terror and up to… i’d say the sixties, early seventies, it wasn’t considered serious literature, could harm the minds of young children, bla bla bla. Thank i was born in the 80s and avoided all that 🙂

[…] Adventure in the Spaceways with Perry Rhodan: The Cosmic League […]