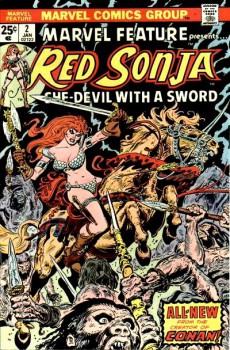 By this stage, Red Sonja has had several highly-regarded artists drawing her; but this is the first issue where we meet the artist most closely associated with the She-Devil: Frank Thorne. His art style takes the character into an almost psychedelic landscape. Check out the cozy inn she stops for a drink in and tell me that place isn’t haunted. Every tree looks like something pulled from The Wizard of Oz and the farm is something straight out of EC Comics.

And while Frank Thorne draws a bad acid-trip version of the Hyborian Age, his Red Sonja is a truly a hell-spawn, living up to the title “She-Devil with a Sword.” Check her out on the cover: that’s not a woman reveling in the thrill of battle. That’s a woman who’s pissed off at the Picts. I love the expression on the one in front, who’s obviously trying to get away from Red Sonja, wielding a sword and axe while riding her zombie horse. In the story itself, she wears a riding cloak that flaps behind her like the wings of a huge bat.

The story begins with Red Sonja robbing a brigand of his ill-gotten loot, not to return to the true owner, mind you, but to keep for herself. Among these items is a gold key inscribed with a prayer to Balek, this issue’s guest demon. One page later, the horse she stole from the brigand is stolen from her by a one-legged man named Dunkin, who’s pretty rude to her even after she decides not to kill him for stealing her horse and trying to behead her.

Dunkin has a bit of resentment towards women because he believes that having one leg prevents any woman from wanting him (maybe if he stopped calling them “wenches”). Apropos to nothing, he grabs Sonja and kisses her. This is something she wouldn’t even let Conan get away with; but she has been questioning her vow recently, so maybe she decided to let a man get just a little closer to her to see what happens.

Two pages later, Dunkin is dead, propped up like a scarecrow by a spear driven into the ground. Sonja realizes that everyone she has met since stealing the gold key has been killed and, as she begins to move, finds that all of the water sources she passes have been poisoned. Furthermore, she discovers that the people living in homes she approaches have been pre-emptively slaughtered before she can even meet them (like that aforementioned farm scene). Eventually, she is dying of thirst and has been reduced to crawling, after her horse drinks some of the poisoned water and dies. At this point, she discovers that it is the brigand she robbed at the story’s beginning who is behind all of the death around her. It is through luck more than skill that she escapes death. At the story’s end, she still has the gold key and the name of a sorceress who might explain its significance.

Besides the debut of Frank Thorne, we also see the introduction of a new writer. Roy Thomas had written pretty much everything Sonja had appeared in up to this point. The new writer is Bruce Jones, who’d already made a name for himself in black and white horror comics and his Marvel debut several months earlier in Savage Sword of Conan 8.  I’ve been a fan of Bruce Jones since reading his work in Pacific Comics’ Twisted Tales and Alien Worlds. He brings a brutal poetry to the series that would eventually earn him work on Conan the Barbarian and Ka-Zar the Savage. (I know, who thinks of these names?)

So it’s issue two of Marvel Feature that feels like the true audition for Red Sonja. A top-notch artist and top-notch writer both producing excellent work that is still being discussed almost forty years later (at least by me).

As a curious aside regarding Red Sonja’s vow, we see Dunkin kiss her without meeting any kind of resistance. Whether or not she chose to forego her vow in this case or if Bruce Jones simply chose to interpret the vow as abstaining from sex or love instead of all physical intimacy is unclear. Further, it’s not clear how we should interpret his death later in the story. Is this simply a coincidence or are we to assume that the spirit to whom Sonja swore her vow is delivering death to anyone who touches her without first defeating her in combat?

Next Week: The Giant Green Robot