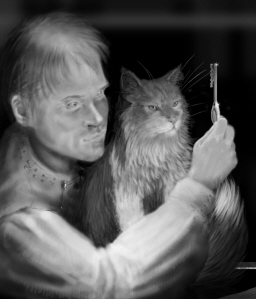 A tale… that has the feel of being told around the fireplace in a fantasy setting. The protagonist, Gloren Avericci, is a freelance Gallery Hunter. This may be code for thief, but to hear Gloren tell it, he is an adventurer in true fantasy style. Even after knowing the story, it is debatable whether his cat, Yr Neh, is a familiar or a travelling companion, though said cat is presented as former royalty and sentient. One of the funniest bits here revolves around Yr Neh trysting with a female cat under Gloren’s bed. To say more would be to spoil the scene…

That very little is resolved in this tale is part of its charm… At times, he fills in his back story or gives teasers about other adventures by incorporating associated bits into his retelling of events. However, he warns us that he’s telling us what actually happened rather than embellishing with any of the literary conventions that a Chronicler might use. Just a moment before any of his many tangential anecdotes could become as annoying as a pebble in one’s shoe, Gloren draws his audience back into the main event — that of his happenstance finding of a very special key, and the events that occurred afterward.

This was a fast and pleasant read. A story such as this deserves a world of its own and more adventures from its hero.

Not surprisingly, we feel the same way. Aaron Bradford Starr’s “The Daughter’s Dowry” is the first in an exciting sequence of classic adventure fantasy tales. “The Tea Maker’s Task,” in which Gallery Hunter Gloren Avericci and Yr Neh journey to a remote and dangerous island which conceals a dark secret, will be published here in January, followed quickly by two major novellas. Stay tuned for details.

You can read the entire review at Tangent Online, and read the novelette “The Daughter’s Dowry” completely free here.

The complete catalog of Black Gate Online Fiction, including the 25,000-word novella of dark fantasy “The Quintessence of Absence” by Sean McLachlan, Harry Connolly’s thrilling mystery “The Whoremaster of Pald,” and Jason E. Thummel’s adventure fantasy novelette, “The Duelist,” is here.