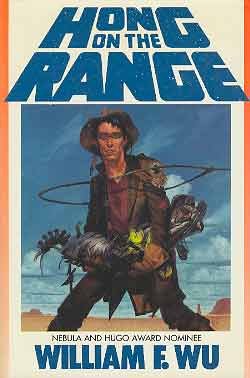 I admit this one doesn’t seem very vintage to me, but perhaps that’s just because I’m getting a little vintage myself.

William F. Wu’s fourth novel, Hong on the Range, was published 23 years ago. It was originally published in hardcover and has never had a paperback release.

And that’s too bad, since it’s the kind of off-the-wall science fantasy that I think would really appeal to a modern audience. Set in a post-apocalyptic American West where cities have decayed and the surviving towns cling to the railway, where most people have cyborg enhancements, meat is harvested from cows without harming them, and a young man named Louie — a “control-natural” forbidden by law from enhancing himself, and who is shunned and misunderstood by others — heads West to find his fortune.

The Old West Was Never This Wild! In a New West filled with cyber-enhanced cowboys and mechanized singing steers, Louie Hong must make his way through hostile territory filled with cattle rustlers and bank robbers, and a passel of cyborg bounty hunters who think he’s both! A story about coming of age in a strange and dangerous land where a young man’s most faithful friend may just turn out to be a computerized steer named Chuck.

While it’s the only novel in the sequence, Hong on the Range is part of a series of stories written by Wu that began in 1985 with “Wild Garlic.” Most of them were published in Pulphouse magazine; the last one, “In the Temple of Forgotten Spirits,” in 1993.

Hong on the Range was published by Walker & Co in 1989. It is 286 pages in hardcover. It has never had a paperback release, but it was re-released in a digital edition for $2.99 last October.

your right it is weird to think that 1989 is starting to be considered vintage and i was born that year!

And you’re one of the young ones. I was born long before 89.

Thanks for the recommendation, John. I’ve been looking for some Weird Westerns.

Just a clarification to John’s kind words about Hong on the Range. This novel, and the short story “Hong’s Bluff,” are not related to the story line about Jack Hong, the character in “Wild Garlic” and the episodic novel “A Temple of Forgotten Spirits.” Long ago, “Hong’s Bluff” had collected more than 20 rejections over many years and I had given up on it, so I used the name Hong in the new series. I was surprised when “Hong’s Bluff” not only got published, but became a double award nominee and the basis for a novel, Hong on the Range. I’ve always wished I’d thought to change the last name in one or the other, but, alas, I didn’t. Sorry for the confusion.

Thanks for the clarification! Will there be any more in the series?

If you ever want to do a guest post for us talking about the genesis of HONG ON THE RANGE, just say the word!