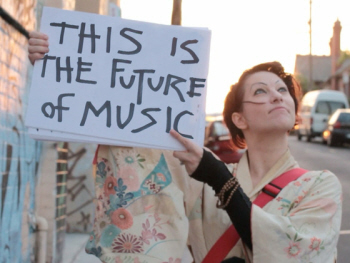 Musician Amanda Palmer has been a favorite of fantasy fans since her days with the Dresden Dolls. Her first solo album, Who Killed Amanda Palmer? (a loose homage to “Who Killed Laura Palmer?”, the famous line from cult TV show Twin Peaks), generated a companion photo book with text by Neil Gaiman and pictures by SF photographer Kyle Cassidy. I first heard about it from Kyle when he came to Chicago to add to his “Where I Write” project, photographing SF and fantasy writers in their writing caves (and taking a pic of me in my big green chair.)

Palmer’s 2011 wedding to Gaiman cemented her status as genre royalty. But true fame had to wait until May of this year, and it arrived in the form of a legendary Kickstarter campaign. Seeking $100,000 to fund her new album and tour, Palmer raised closer to $1.2 million, winning the title Queen of Kickstarter from MTV and numerous news outlets in the process.

Palmer’s new album, Theatre of Evil, arrived a few weeks ago. But its success has been overshadowed by a growing controversy surrounding hiring opening acts for her tour. Here’s what The New Yorker said yesterday, under the headline “AMANDA PALMER’S ACCIDENTAL EXPERIMENT WITH REAL COMMUNISM”:

Amanda Palmer, the singer who raised a spectacular sum on Kickstarter to fund her new album and then neglected to pay the musicians who toured with her, is the Internet’s villain of the month… Album in hand, Palmer prepared to tour. She advertised for local horn and string players to help out at each stop along the way: “join us for a couple tunes,” as the post on her Web site had it. Even better, “basically, you get to BE the opening ACT!”

Just one thing, local musicians. There would be none of this million-plus dollars available for you. Supposedly, Palmer had spent it all on producing her album… She promised instead to “feed you beer, hug/high-five you up and down (pick your poison), give you merch, and thank you mightily.” This is a compensation package which, honestly, might be worse than nothing. Depends on the beer.

Cue furor, via the usual music, snark, and music-and-snark Web sites. Palmer has since renounced her hornsploitation scheme and will pay the band, but the outrage remains.

The story has been picked up by The New York Times (“Rockers Playing for Beer: Fair Play?”), Digital Trends (“Kickstarter queen Amanda Palmer, meet your Internet backlash”), Gawker, (“Amanda Palmer’s Million-Dollar Music Project and Kickstarter’s Accountability Problem,” accompanied by a graphic showing Palmer grabbing bags of money), and other news outlets. She’s been called out on Twitter multiple times by musicians unions, and American Federation of Musicians President Raymond M. Hair Jr. told the New York Times, “If there’s a need for the musician to be on the stage, then there ought to be compensation for it.” As The New Yorker noted, Palmer has since relented and agreed to pay the opening acts, but so far the furor shows no sign of dying down.

Without knowing the details beyond this post (and thanks for putting this up, John), it sounds to me as Palmer should have known better. Lots of people do things for free in the performing arts, but NOT when lots of people are paying to get in. In an era when orchestras are falling apart and professional musicians are scrambling for every penny, Palmer should have been aware, at the very least, that her decision not to pay would lead to exactly this sort of public flogging. Better still, she should have budgeted some of her largesse to spread the wealth. I wonder what Gaiman makes of all this?

Unless Gaiman’s an idiot, he’s standing by his wife through all this. These are the moments when husbands are tested.

I agree that Palmer probably should have known better, but I understand how she could have made a mistake like this. This is shaping up to be the biggest tour of her career, and opening act slots are presumably much coveted. Palmer has BEEN an opening act, she knows what this kind of exposure can do, and doubtless felt that by making an effort to reach out to local musicians at each show (instead of a single opening act) she was supporting local music.

As she told the NEW YORK TIMES, “If my fans are happy and my audience is happy and the musicians on stage are happy, where’s the problem?”

Unfortunately, while Plamer has been a struggling musician for over a decade, she’s only been publicly RICH for four months. And she’s learning the hard way that the public views the rich through a very different lens. What might have been seen as an act of generosity when she was struggling is seen as simple exploitation now that she’s wealthy.

This from the New Yorker yesterday:

“*Corrections: This post originally misstated the amount of money Palmer sought on her Kickstarter page, and mistakenly implied that she was paying none of the musicians on her tour. We regret the errors, which we have corrected above.”

Also, they never interviewed anybody who appeared on the tour.

I think people still have a skewed idea of what a kickstarter is. It’s not (or not usually) “free money”. It’s about cashflow; it’s raising cash up front to produce a product if enough people want that product. In the majorrity of cases that I’ve seen, people contributing anything more than a very token amount are receiving the “reward” of the product to be produced (be it game, book, CD, whatever) – and those contributing more are getting other cool stuff as well. These are not donations, it’s just about ponying up the money before the product is available, to be sure the product BECOMES available.

That said – AFP’s kickstarter raised more, I think, than she could have imagined, and she simply didn’t know how to handle the financial snowball.

I’m sure she – and many others – will learn from this. They’ll have to, because kickstarter et al aren’t going to go away – this is going to become one main method for producing product (for one thing, it allows people to gauge product demand before doing all the work, which for creative/artist types can be pretty important – it will tend to prevent creators from investing huge time and effort in something that people turn out not to want).

Thanks. Not sure those are really meaningful corrections though… I didn’t get the impression she was against paying ANY of the opening acts, just most of them.

> Kickstarter… allows people to gauge product demand before doing all the work, which for creative/artist types can be pretty important
> – it will tend to prevent creators from investing huge time and effort in something that people turn out not to want.

Icant decide if she was being naive (inthat she didnt realize that an artist that publicly made a bunch of money has different rules compared to a starving one) or a hypocrite (since in the past she has made posts where she expressed the opinion that every artist deserves to be paid).

Yes, that’s the crux of this whole affair: naive, or hypocritical?

I tend to give people the benefit of the doubt, especially for a first offense. I doubt this is a mistake Palmer will make again, anyway.

I think folks should cut her a bit of slack on this. Sometimes it takes a bit of practice to get good at business.

I’m sure she gets it now, that the people who continue to help her with her music career expect to share in the success both in terms of exposure and with compensation.

If she really gets it, she’ll kick off a “pay-it-forward” campaign to really help some of the struggling artists that are within her sphere of influence now, and I see that being a win for everyone involved.

> I think folks should cut her a bit of slack on this. Sometimes it takes a bit of practice to get good at business.

Indeed. This is hardly a pattern of behavior with Palmer.