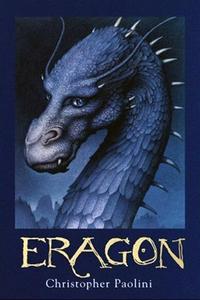 The new school year has brought me a fresh crop of tutoring students, which means I get to ask one of my favorite questions: What do you read when nobody’s making you read anything? In the nine years since I left the classroom and started making house calls, almost all my students have named fantasy as their favorite genre.

Mystery won’t be too big a stretch, especially since my mystery mavens have a taste for Poe. But what on earth will I do for my new kid who only truly enjoys sports biographies? Eventually, after I’ve earned his trust, I might be able to entice him to stretch his taste.

Meanwhile, here I am staring Tim Tebow’s memoir in the face, trying to stretch my taste to meet the kid’s. I suspect my Scarlet Letter trick would break down if I tried to read a football memoir as a failed fantasy novel.

Oh, man. What I wouldn’t give to face the Eragon quandary again.

A lot of my students have loved Christopher Paolini’s Inheritance Cycle novels. Several have asked if we could work on them together. I have tried to love Eragon, and yet failed even to finish reading it.

Several times, I picked up Paolini’s debut novel and held firmly in mind its importance to my students. Alas, it reads like student writing–like a fifteen-year-old student’s writing, which it originally was–so I always found myself picking up a pencil and commenting in the margins as if on one of my own students’ drafts. To me, Eragon feels only slightly more polished and promising than that other famous adolescent hit, “The Eye of Argon.” My comments might have helped Paolini improve the story or its execution, but it’s hard to imagine I–or anyone–could have helped it sell better.

Could anything be more English-teachery than marking up a massive global bestseller with revision advice? So after a couple of chapters, I always gave it up. There may come a day when I am able to work usefully with my own students on Eragon, but that day is a long way off.

Here’s the thing, though: the upper limit of the ZPD on any given day depends a lot on how well the teacher is able to get down into the ZPD with the student. Some teachers just can’t ratchet their personal expertise down far enough to join the student at all. I knew working on Eragon would temporarily turn me into one of those teachers, and then I’d have been messing with the bond of affection between these kids and a favorite book—a small violence, maybe, but a violence nonetheless. They get enough of that in school.

As I face down Tim Tebow, I hope I can do better by him than by Paolini. Tebow, at least, will be able to introduce me to narrative tropes I don’t already know inside and out. I might learn something, and this time about more than my own current limitations as a teacher.