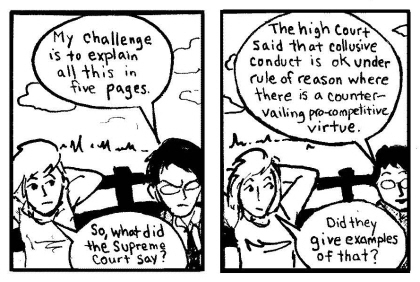 There’s been a lot of passionate discussion and conjecture recently surrounding the U.S. Department of Justice’s case against Apple and several of the world’s largest publishers over alleged price-fixing for e-books. It’s a complicated case, with a lot at stake.

So complicated, in fact, that the judge demanded that attorney Bob Kohn re-submit his 25-page legal brief against the DoJ’s settlement with three publishers in just five pages. Frustrated by the tight page limit, Kohn made legal history by submitting his brief in the form of a comic strip.

His argument — that the settlement harms the public, and Amazon’s aggressive price-setting on e-books is presumed illegal — remains the same in the new brief. But as Publisher’s Weekly observed earlier this week:

His rendering is brilliant — not only is it a not so subtle jab at the court for limiting such a complicated case to five page briefs, as a comic strip, the brief will be widely digestible for the general public who may not have the gumption to plow through a typical legal brief.

Brilliant it may have been, but it didn’t have the impact Kohn was hoping for, as yesterday the judge approved the DOJ’s proposed settlement.

Khon isn’t a party in the case, what he submitted was just an amicus brief. The Court is under no obligation to even consider what he submits. So, I’m not surprised to see they limited him. usually, they just take whatever is given them so that person won’t run to the press; which means the Court probably did intend to read it.

What the comic does do, is shine a light on the fact that there is still no coherent policy for the policing of digital media. That’s something that Apple, the DOJ, and the Court of Appeals would all rather have avoided.

Good point on the amicus brief. There are so many parties in this case, each with its own complex self-interests at stake, that I think readers can be forgiven for wanting a digest version — regardless of who the source is.