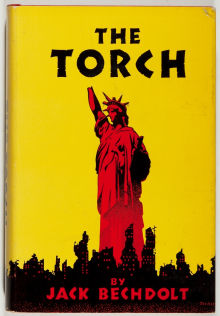 The ever-vigilant Jason Waltz has called our attention to this article on Singularity & Co., who are rescuing extremely rare SF and fantasy titles and bringing them back into print as e-books.

It began with a Kickstarter campaign by Ash Kalb, Cici James, Jamil V Moen, and Kaila Hale-Stern, which raised $52,276 (350 percent of their $15,000 goal). The campaign ended on April 2 and the team wasted no time setting their dream in motion. Each month they have carefully selected one out-of-print science fiction novel, tracked down the copyright holders, and re-packaged it in DRM-free PDF, Epub, and Mobi format for subscribers.

So far they have reprinted A Plunge Into Space by Robert Cromie (first published in 1890) and Jack Bechdolt’s 1948 novel The Torch. They have also opened a Brooklyn bookshop where vintage science fiction and fantasy paperbacks are filed chronologically by publication date, which I find weirdly compelling.

Tracking down old books — both rights and physical copies to scan — has proven more challenging than they expected. Their planned third book is Mr. Stranger’s Sealed Packet by Hugh MacColl, first published in 1889. But according to a Wired article about the group, locating a copy took some effort:

The team tracked down the lone copy [of Mr. Stranger’s Sealed Packet] out of university archives, and went on a thousand-mile drive just to scan it. Despite being out of copyright, none of the universities who owned a copy of [the book] permitted scanning.

Singularity & Co. currently don’t offer individual e-books for sale; titles are available only to subscribers. Subscription plans start at $29.99 for a year, or $129.99 for a lifetime subscription. Learn more at their website, savethescifi.com.

I’m tempted to subscribe. What better way to get to know forgotten (at least i assume that, otherwise those books would be in print or at least available as an ebook already) authors.

Thanks for letting me know about this. Although I suspect most of them will be books I never would have bought on my own–certainly neither of the first two released–I just signed up for a lifetime sub.

According to the website, subscribers help choose what books should be tracked down and reprinted next. I’m not sure how the voting process works, but to get the most out of your subscription seems to require that you already have some knowledge of older SF.

I’d be great at the pulp era, but so far the books they’ve chosen were completely unknown to me.

Glad to hear it. Thanks for supporting a worthwhile project!

Hi John,
in that case : Robert F. Young (everything from) 🙂