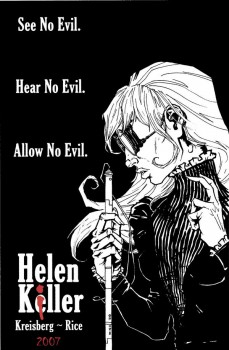 You know the prologue. Contracting an illness (possibly scarlet fever or meningitis) at the age of nineteen months, Helen Adams Keller survived, but was left both deaf and blind. Keller’s parents would eventually contact Anne Sullivan, herself blind, to tutor their daughter (who, at the age of six, still had not grasped the concept of words representing things).  By pressing her hand into the girl’s palm, Sullivan was able to teach the girl to read sign language through touch.  After that breakthrough, Helen Keller went on to write twelve books, meet thirteen U.S. Presidents, help found the American Civil Liberties Union, and introduce the Akita breed of dog to the United States.

So when Andrew Kreisberg decided to write about the further adventures of Helen Keller, he had his work cut out for him, since Keller’s real life adventures would certainly put any fiction to shame. What he opted for is a crazy mash-up of Daredevil and steampunk that somehow manages to remain consistently respectful to the real-life men and women upon whom the characters are based.  The basic premise is that Alexander Graham Bell (who in real life had indirectly referred the Kellers to Anne Sullivan in the first place) has developed a pair of miracle eyeglasses called an omnicle.  When Keller wears the omnicle, the device hotwires through her dead nerve endings and allows her to both see and hear. Further, the omnicle allows her to see into the auras of those around her, revealing their spiritual purity or corruption. Unfortunately, the omnicle also reconnects her with the long-supressed rage she felt when living in quiet darkness.  This rage manifests as increased agility, accelerated healing, and a desire to kill. Of course, someone has the idea of hiring Helen Keller as a federal agent to protect the life of President William McKinley. Things go wrong.

Really, I’m just giving you the set-up in the first half of issue one. The assassination of President McKinley (oh come on, that’s not a spoiler — it’s history) is just one step in a master plan that’s even crazier than Alexander Graham Bell inventing miracle glasses.  Not that Bell is a slouch in the rest of the series, nicely filling the role of a turn-of-the-century Q with all manner of wild inventions to help Keller in her missions (you won’t believe which invention is something the real Bell actually built).  Artist Matthew JLD Rice does a fantastic job of giving this black-and-white comic a mix of grittiness and wonder as we move from acrobatic alley fights to sci-fi inventions.

While it’s impossible to do this sort of story without some humor, Kreisberg opts to keep the tone mostly serious. The rage that the fictional Helen Keller feels is plausible, given her early life.  It’s the rage of a girl unable to communicate for years, a girl who may have believed her entire life would be spent in solitude.  The idea of a device that “cures” her blindness and deafness at the cost of resurrecting that rage is a wonderful twist and a nice way for the author to explain why she doesn’t wear the glasses all the time. It’s this conflict, coupled with the knowledge that the real-life Helen Keller achieved so much more as a deaf-blind woman than most people who were not so afflicted, that gives the story its heart.

The strangest part of this comic, at least from my point of view, is that it was not a much bigger hit.  Aside from a handful of reviews, I’ve seen no mention of it on the Internet. This is easily one of the best comics I’ve read in the last five years and it’s pretty much impossible to find a whole run of it anywhere. I’ve scoured every comic shop in Chicago and I never could find the final issue.

But I wouldn’t review something this great just to disappoint you. All four issues of the series are available as high quality PDF downloads from WOWIO at 99 cents an issue. That’s just under four dollars for over a hundred pages of storytelling.  Honestly, how many times have you paid $3.99 for one mediocre superhero book that squeaked in at twenty-two pages?  WOWIO even offers you preview pages so you can see for yourself how cool this book is.  So check out issues one,  two, three, and four, then tell me what you think.

I am buying those NOW.

And thanks for letting us know about them. I don’t really follow comics anymore, so I’m sure I wouldn’t have heard about them otherwise.