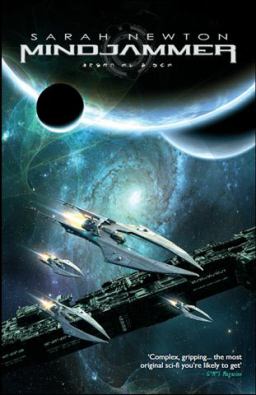 I first encountered Sarah Newton in 2010, when Howard Andrew Jones mentioned how impressed he was with Mindjammer, a far future transhuman space opera setting she wrote for the Starblazer Adventures RPG. I picked up a copy of her massive Legends of Anglerre fantasy roleplaying game on the strength of his rec and wasn’t disappointed. It was a gorgeous and inventive game based on the popular FATE system and we reviewed it in detail in Black Gate 15. I was especially impressed with Sarah’s crisp prose and attention to detail.

We don’t let talent like that get away if we can help it, so we recruited Sarah as a BG contributor last year. Her detailed appreciation of a classic urban setting, Pavis – Gateway to Adventure: The Classic RPG City is Back! (parts One and Two) was one of the most popular gaming articles we’ve published on the website this year.

Now Sarah has published her first novel, Mindjammer, through the brand new Mindjammer Press. Mindjammer Press, a new roleplaying and fiction imprint, has announced plans to publish both the Mindjammer roleplaying game and a new line of associated fiction. Their publication schedule includes the upcoming second edition core book, Mindjammer: The Expansionary Era — with vastly expanded content, new and detailed background material, and all new artwork — in spring 2013. It will be followed by the Solenine campaign pack, based on the setting for the first novel, a new and revamped Black Zone campaign, and the second novel in the Mindjammer series, Transcendence. Here’s the description for the first novel:

IT IS THE SECOND AGE OF SPACE… In the seventeenth millennium, the New Commonality of Humankind is expanding, using newly-discovered faster-than-light travel to rediscover lost worlds colonised in the distant past. It’s a time of turmoil, of clashing cultures, as civilisations shudder and collapse before the might of a benevolent empire ten millennia old.

In the Solenine Cluster, things are going from bad to worse, as hyper-advanced technologies destabilise a world in chaos. Thaddeus Clay and his SCI Force special ops team are on the trail of the Transmigration Heresy. What they find is something beyond even their imagining – something which could tear the whole Commonality apart…

Mindjammer is receiving a lot of positive press from readers both inside and outside the gaming industry. Here’s what Stargazer’s World said about it:

What I also enjoyed tremendously was that Mindjammer is a science fiction story that really deserves the name. The technology described sounds plausible and the Commonality era feels “real.” And even though Mindjammer is highly entertaining it also makes the reader ponder a couple of philosophical questions like what makes us human and is there a way to cheat death? In my opinion good SF should not only entertain but make us ask questions. Mindjammer does that all the time…

Mindjammer is a very exiting and intelligently-written novel that should be on the reading list of every SF fan!

Mindjammer is available now in Kindle format for $3.99 and in print for $15.95, both from Amazon. Check it out.

[…] a lot of buzz about the book already. The Mighty John O’Neill over at Black Gate posted a longer discussion about it just the other day. All you need to know is that Mindjammer is available now in Kindle format for $3.99 and in print […]

[…] the novel based on the far future transhuman space opera setting of the same name. We covered Mindjammer right here back in […]

[…] author and friend Howard Andrew Jones (The Desert of Souls), John O’Neill at the marvellous Black Gate Magazine, Steve Cotterill’s Shores of Night, and many more. To cap it all, Mindjammer was mentioned in […]

[…] called Mindjammer, was talked about by John O’Neill on the Black Gate website in 2012 (see here). It takes place in a vast interstellar civilisation called “The New Commonality of […]