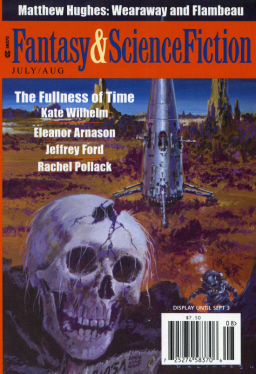 Nice creepy cover on the new issue of Fantasy & Science Fiction. This one is by Ed Valigursky; click for a bigger version. Great line of writers this issue too, including Kate Wilhelm, Eleanor Arnason, Jeffrey Ford, Matthew Hughes, Rachel Pollack, Albert E. Cowdrey, and many others. Check out the TOC:

The tireless Lois Tilton has already reviewed the issue in detail at Locus Online, calling this one “A superior issue… most notably a fine novella by Kate Wilhelm and a short anthropological tale by Eleanor Arneson.” Here’s what she says about Matthew Hughes’ “Wearaway and Flambeau,” a far-future tale of Raffalon the thief:

This time, Raffalon has been nabbed in the act of breaking into the well-warded stronghold of the wizard Hurdevant the Stringent. The wizard employs an experimental punitive spell, which, fortunately for the thief, goes awry in a manner that offers unexpected possibilities. Entertaining stuff. The editorial blurb claims that this one is set in the author’s far-future universe, but it seems like a typical fantasy world of the sort with wizards and thieves.

The cover price is $7.50, for a thick 258 pages. Additional free content at the F&SF website includes book and film reviews by Charles de Lint, Michelle West, and Lucius Shepard; a Science column, “Quicksand and Ketchup,” by Pat Murphy and Paul Doherty; and the “Curiosities” column by the talented Bud Webster. We last covered F&SF here with the May/June issue.

And, over a month ago, there’s this review at Tangent Online:

Thanks — that’s fantastic! I should have checked TO first. 🙂

I’ll be sure to check there before I post the next one.

[…] column by Chris De Vito. Cover artist this issue is Kent Bash. We last covered F&SF here with the July/August […]