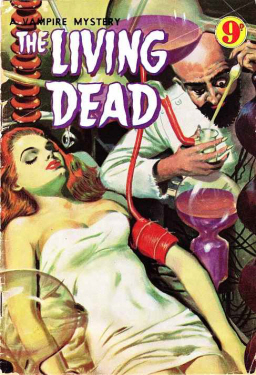 When I originally wrote the title above, it was “The Spectre Library Brings Rare Pulp Fantasy Back to Print.” I had to change it when I realized it wasn’t true. Damn digital books… I have to change the way I speak now.

Let me start over.

The Spectre Library, a small press outfit known primarily for reprinting the works of Victor Rousseau, has produced Kindle versions of all four of Michael Waugh’s rare short novelettes:

All four were originally produced by Cleveland Publishing Co., an Australian publisher, in pamphlet format between 1954 – 55. They are quite short, between 45 and 48 print pages.

The Kindle versions feature the original cover art, and are priced at $9.99 each (click on the image at right for bigger version).

On their website The Spectre Library says they “issue lost, rare works of fiction, with a focus upon publishing jacketed limited edition smythe-sewn hardcovers of Weird, Adventure, Detective, Crime, Oriental and Fantastic Content.” Sounds like an enlightened calling to me.

They also have an excellent gallery of cover art of Science Fiction, Fantasy, Weird & Occult publications — including paperbacks, digests, pamphlets, pulps, and magazines — from Britain, Australia and Canada between 1930-1966. It is curated by Morgan A. Wallace.

Where do you find this stuff John? When I read this posts of yours I feel like I’m back on the block one step behind my comic collecting nemesis who gets to the good stuff a few hours before I do.

It was years of cutthroat comic collecting that helped me refine my blogger’s nose.